The key to this move is that it starts with one beat of a 'outwards two-in-one-hand juggle'.

(In the first cycle of the move on the clip, I do a 'take-out'- ignore that, you don't need to do a take-out)

Let's assume that you're going to do that throw with your left hand- normally, in the 'cascade' pattern, that throw would be across the center of the pattern to the right- instead, you throw this ball away from the center, to your left.

The right hand, already in possession of two balls, spies the peaking third ball and, its greed knowing no bounds, withdraws to the right, flying over the third ball and, swooping in a clockwise circle,gracefully intercepts it as it drops.

It then continues that anti-clockwise path, taking it to the left and underneath the left hand, at which point, realising that it's now holding three balls, panics and throws them all upwards under the left hand.

It throws them in such a cunning fashion, that the balls spilt into a neat triangle formation whereby the practised hands of the juggler, now completely empty, can skillfully retrieve two of the balls and recommence the basic cascade.

This move looks good just done once as it breaks up the flow of the cascade in a way that few other tricks do.

In this video I'm doing it repeatedly, alternating the sides, that's a nice looking sequence in its own right, but I think the main value of learning to do it repeatedly is as a kind of 'training drill' cos, when you get to the point where you can do that, your ability to just do the move once will be very solid indeed.


Tips/Hints
1. Practice throwing three balls out of one hand and going straight into a juggle

2. Practice a variety of other 'multiplex' tricks (these are any moves involving gathering more than one ball into one hand)

3. I'm going to upload a slow-motion version of this clip in the near future

4. Very important- remember that this move starts with the 'outwards tow-in-one-hand' backwards throw- a common mistake is that beginners forget this and the sequence just doesn't work without it. 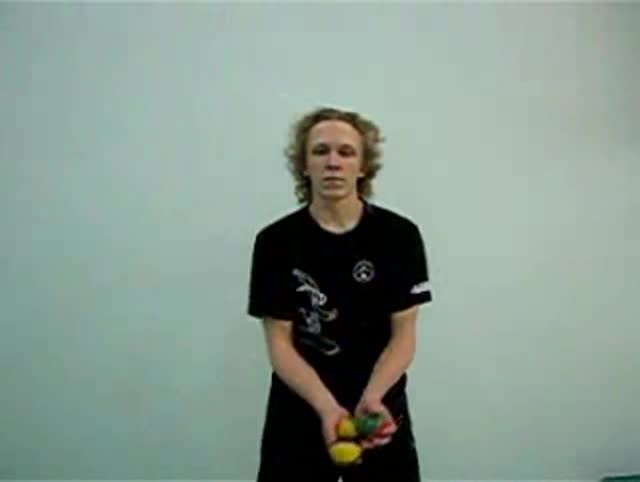