Sugra the Juggler, JUGGLING BALLS, and the CURRENC...

Sugra the Juggler, JUGGLING BALLS, and the CURRENCY of MONEY 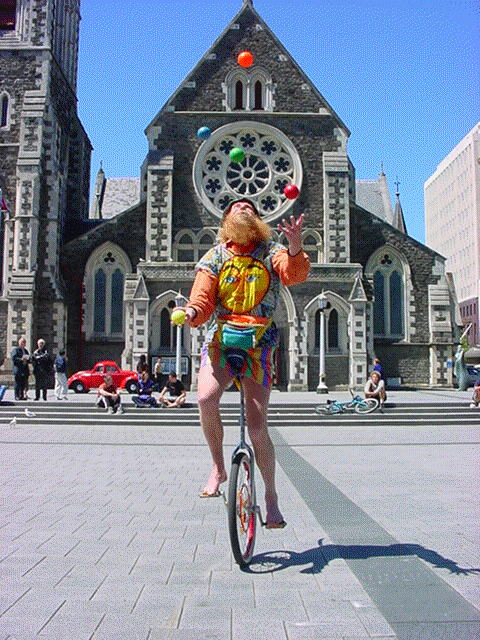 Interviews - JUGGLING BALLS, and the CURRENCY of MONEY 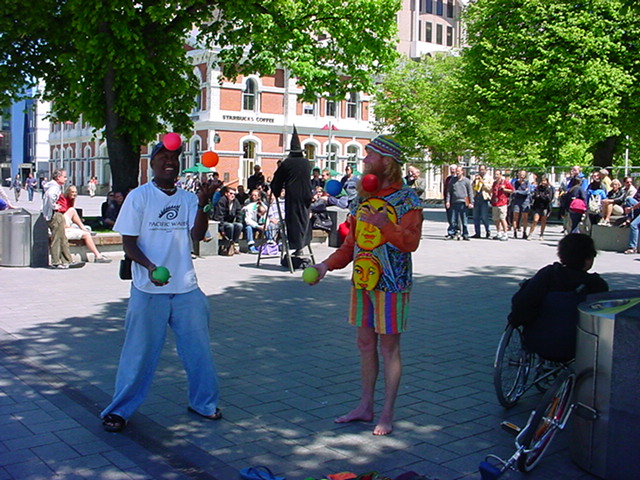 JUGGLING BALLS, and the CURRENCY of MONEY

The definition of Juggling as I see it is; It is the art of balancing, of finding that sweet spot in the middle of so many opposites, extremes, that produces the music of the spheres. It is the creation of beauty in an apparently impossible way. It is illusion without deception (more balls than hands, yet none of them falls). It is multi-tasking in the most perfect way with the curves and flow of complete spheres considering the amazing way the human being is designed. It is mastering gravity. Juggling is the balanced control of the individual by the individual, churches, companies and corporations eat your heart out!

For me, I see all the laws of the universe expressed in Juggling, you are dealing with spheres, it is the music of the spheres. The basic pattern in Juggling is the infinity sign, the figure of 8 on its side. It is a dynamic dance balancing opposites.

Juggling is a very alone thing, and so as I progressed and as I became
more skillful, I thought, how can I make it more inclusive, how could it be more interactive. So I explored it, I would throw a ball to a child and they would throw it back and I would keep Juggling from it and they felt like they were involved, they started it – they threw a ball and I continued Juggling from THEIR ball and gradually it built up.

I steadily got better at directing them how to throw good throws to me, because the better they throw the balls to me, the better I could get them back to them, and the more fun they would have. The more they co-operate and help me, the more fun they have, and the more I can do, the more they can do. They are on their learning edge and I am on my learning edge yet with very different levels of skill. It is really exciting, nobody knows when the next ball is coming, and everybody laughs a lot.

I discovered, as I worked on it over the years, that the balls that are thrown backwards and forwards are the “medium of exchange”. The balls symbolize and represent money, they are three dimensional coins! The balls are currency, it is the current of energy, it is currency, it is the flow of currency. If I throw a good throw to you and you throw a good throw back to me it is like me lending you money and you paying it back and a trust is built up which can then be built on.

The balls are the medium of exchange and what we are doing together is expressing the basic principles of the way money is supposed to flow as the invention that it is.

The biggest crime is holding on to the balls, if you hang onto the `balls, it means everybody else misses out, it is energy and it has got to flow. Money has no value until you spend it. Only by getting rid of what you’ve got, can you get more.

It is energy, money is supposed to represent human energy, it takes so much energy to grow a bag of spuds which can be exchanged to, say, clean some windows, it is the medium of exchange. That is what we are doing with the balls, we are exchanging balls. It is energy, human energy.

In the day and age we live in at present, money no longer represents energy, human energy, except within certain narrow limits. It is something that has gone off at a tangent and it has created this amorphous reality that we live in which is separate and removed from the real world, the natural world.

Charging interest on money, usury, is totally contrary to what money is supposed to be. Money is supposed to put value on things, but if only certain things are considered valuable, rather than everything relative to human energy.

The amount of human energy that goes into creating something is its value, but that value has been usurped, it doesn’t work like that anymore. If money is supposed to represent human energy, the amount of energy a person uses to achieve a certain thing, say make a machine, which then does the work which makes money, like cell-phones, etc, the money the machine makes is false money, it is not real money, it is not human energy anymore, it becomes a control mechanism. It no longer serves the purpose for which money was invented.

Money is a wonderful invention with which incredible things can be achieved, far beyond the great accomplishments of today, if only the solid base of representing human energy were retained fully. It is a means of doing things easier, more efficiently, of bringing skills, talents and materials together to achieve great things.

So the people who control the money have discovered that they can rule the roost so money becomes, rather than the medium of exchange, a means of control of one person by another rather than balancing and equalizing things out.

What I do with this I.E.I. as I call it – the Interactive Energy Interface – throwing the balls between people in the way I described earlier, because of my skill with Juggling, I am able to get the balls out to who
needs them most, which is the role the banks etc are supposed to be fulfilling.

I have the role that I have because I have the skill to get rid of the balls quickly enough to those who need them most, to keep everybody happy. That is the banks’ role. Their job is to supply money to who needs it most, it is not to control peoples’ creativity in such a way that it only serves the banks’ very questionable purposes.

The way to control the flow of money is not by charging interest on it but by increasing or reducing the amount in circulation so then it flows freely. It is like the oil in a motor, too much and it is dragged to a halt,
too little and it seizes up.

In this I.E.I., this interaction with the Juggling Balls, it is the flow that is important, it has to keep moving. As soon as the balls are held onto then everybody, directly or indirectly, misses out, it stops flowing, and as I said before the biggest crime is holding onto the balls.

The basic Juggling pattern with three balls is a stable base to comeback to, the balls come in and go out, come in and go out, as they are needed, to where the people are and they make this beautiful, almost surrealistic creation that we all do together.

The better they throw the balls to me, the better I can throw them back to them and the more dynamic it becomes. Then, while I am throwing the balls to these people, someone will be watching from further back, so I will throw a ball to him/her at the same time and catch him/her unawares and it shocks them into the present, it brings them into the here and now – no spectators, only participants! They usually catch it and say “What do I do with it now?” and I say, “Throw it back.” and as they do, I throw another ball to them, while I am throwing to those closer. And we all laugh!

The Juggling came first, then the philosophy built around it. Juggling is down-to-earth, and physically real, yet the philosophical aspects extend, with the spheres and the music of the spheres, like the planets around the sun, and money, to great heights.

It started off with children, children instinctively understand how money is supposed to work but they are educated to wrongly understand it, to where it becomes “I’ve got this and you can’t have it.”, “I am the king of the castle, and you are the dirty rascal.”, and that is totally the opposite of what the purpose is that money is intended to serve.

Money is a way of making people happier and achieving more.

I am talking here in principle, specifics vary according to context, of course, where as when work comes from the heart, you will do a lot more of it and make a lot better job of it.

It is a labour of love. Then, the story is to make the people happy. Where the concepts of Social Welfare, the unemployment benefit etc, came from in the first place was from people who had vision and realized that if the people are happy, then our society and community is happy.

In this world they think that to clean up the environment you have to make people more unhappy, but that is going totally the opposite of the direction we really want to go. We won’t make the world, the environment, any cleaner, any happier by making people more miserable! If the people are happy, what extends from them will tend in the direction of happiness.

It is really the separation between the heart and the pocket. The heart is the centre of peoples’ being, but the pocket is removed, it is one step removed and when that step is removed and extended further and further then it ends up to where you’ve got companies that are in effect cancerous growths, to fill the gap.

A company’s driving force is profit, and it has no upper limit. A company doesn’t feel anything, the people within it certainly do, but the company itself doesn’t. So it is the company that is all important not people in the present aberrated system. People are the basic building block, it, the company, is a cancerous growth feeding off its host.

Inherent in the process of throwing the balls are images and concepts that can be applied to all interactive aspects of life for those who have the vision and imagination to see it and for everyone, it is fun!