Posted: 1st Jan 2012
Hi,
I am new to Poi only starting about a year ago and simply love the learning experiences I am having while playing with poi.

I have been practicing pretty regularly and going on hear looking at all the cool videos and I practice and drill and have a great time learning.

I have reached a point where I can become pretty free form although I'm still practicing my behind the back and crossers and 5+ beat weaves.

I kinda of was wondering where to go from here? I want to start on some of the more techy stuff but dont really know where to begin.

Any and all help is greatly apreciated!

Posted: 3rd Jan 2012
Flowers? It's says nothing. But if you can become pretty free with
some moves, I'd continue here.. Simply, continue with the drilling
and start to experiment a bit with a basic tech, like planes,
timing, direction, circle etc. 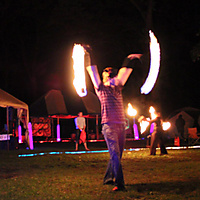 Posted: 3rd Jan 2012
Check out Drex's poi tech blog for some ideas. He has a lot of videos. Google drexfactor.

I agree with Aston though. Definitely delve deeper into flowers. Learn as many as you can. There are plenty of tech-y hybrid flower patterns that look pretty awesome.

Posted: 5th Jan 2012
Julian: How does it not say anything? The sheer volume of what you can do with flowers meant that I figured it was fairly pointless going into detail on anything. You can keep yourself busy with them for a long while, especially when you consider wall-plane flowers as well.

Decent tutorials on starting them are easy to find on youtube.com or in the learn section here.

Josh: If you have specific questions about anything I would be happy to help.

But just to give a direction to explore in, what more is really needed than saying "flowers", "windmill", "horizontal stacks", or whatever?

Posted: 6th Jan 2012
A lot more, cause saying expore flower is like saying explore
spinning..so it point to nowhere, but you see saying 'wind mill'
is much different cause it target a specific hand position.
Horizontal stacks is beter olny because it horizontal, cause
stacks are far beyond andvanced spinning(and you know it).

You know what I meen ? I don't want to argue over your
decission, but I want to point a different perspective
thou. Think of it.

Posted: 6th Jan 2012
But that is exactly my point. Why limit it by saying "this type of flower"? A flower you find difficult someone else might find simple.

But they are a generally well-defined family group of moves that is easy to start exploring and finding which of them you like. So certainly it is not like saying "explore spinning". Telling someone to look at "flowers" points to a very specific type of movement (movement family if you prefer), that, in addition to being easily defined, is an excellent building block to learning to move more fluidly with poi in general. As well as this, the majority of flowers are aesthetically pleasing which means worthwhile incorporating into performances.

I do not view saying "flowers" as any different from saying "horizontal stacks" or "CAPs" or something similar. "Windmill" is a bad example in my previous post, since that is one particular move, and I find it more worthwhile to point people at groups of similar moves. So you can learn one (any) flower and then start looking at changing a single factor, like moving one arm in an opposite direction to the first flower you learned. This opens up a new move, which can in turn be changed by altering a given factor.

Hopefully it now makes sense why I say just said "flowers"? I happen to think them a better next step for Josh than CAPs or Hybrids, otherwise I could have said one of those just as validly.

(PS: I still need to try this on someone at some point, but I know of a few others who have done so, and that is skipping weaves and butterflies entirely in favour of flowers, specifically full extensions, as a first move [after basic plane control has been learned]. I have not done a workshop for a while, but this is the approach I will be taking in the future, and is how I have started teaching a few people on an ad hoc basis. Usually someone else tries to teach them a weave then. Oh well.)

(I am not arguing just for the sake of it, I do have reasons for most of what I say on HoP. It might come from having been here a fairly long time though, so I am happy to elaborate if stuff is not entirely clear to people. In this case, there are plenty of excellent discussions about flowers here, as well excellent tutorials easily available once you know what to look for. I do appreciate your views as well, I just happen to like mine better.

Posted: 7th Jan 2012
Originally Posted By: aboutI do not view saying "flowers" as any different from saying "horizontal stacks" or "CAPs" or something similar.
Sure ? Sorry, but then you don't know what you are talking about.

Talking about group of moves is possible only if evrybody
understand the name of the group, but you can't predict
that.

Even if you understand the group, the exact interpretation may
vary as wide is the group.

You can't simply skip buttfly, and weave because you would than
need to explain the very basic by suplementing these with more
granular and accurate theory.

It's very strange about naming convention, but can lead to mis-
uderstanding completly. So here come context..

So if you really want to than foget about flowers, or provide
an acceptable deffinion written in the utmost basic terminiology
that everybody will understand.

Posted: 7th Jan 2012
Flowers are a basic unit for discovering how the poi move in relation to one another. In your first post, Julian you said to focus on "planes, timing, direction, circle etc"

I could teach someone to drill planes, timing, direction and circle by teaching them different flowers. The beauty of just saying "flowers" is that it enables any user of poi to focus on this area and come out with something new by putting the fundamentals as they understand them together.

A novice would then be learning much more simple flowers than someone more advanced, but both parties will gain from drilling flowers, unless of course one has shifted into the

Happy whirling, one and all!

Posted: 25th Feb 2012
Thanks for the great responses everyone!!

Yes flowers was the next step along my path!!

I have been working on my flowers for a good bit now and I am very thankful you pointed me in the right direction!

Just have to work on being able to do them both directions and ill be set!

Also pointing me to tech blogs is amazing!

Hope all is well and thanks for the help!
Home of Poi