Forums > Beginner Staff Moves > Multistick of the variety greater than 2

Posted: 13th May 2005
so ive searched through the archives and not found much just a couple of threads about juggling multistaff. having watched kyle do some insane stuff ive had a bit of a play and was wondering what multistaff things people are playing with if anything at all.

been playing a bit, but will get back to you when i'm a bit more sorted on some of the funkier stuff.

But the traps one is worth a laugh too, it's just a bit harder, cos traps are tricky...

Posted: 14th May 2005
(and if im perfectly honest, the one you just described there was the one I thought you were talking about in the first place)...

Theres footage of it in the Tim section on one of the Falmouth vids. I think its Durbs'es'es'es'

Posted: 14th May 2005
actually what would totally be better would be to swap sticks behind your back as your doing the steve... That would be rockin'

or free cartwheels. That would be rockin' too...

As for playage with more sticks, there is tons out there. There is the juggle approach with x sticks, a more contact based approach with x sticks, and also countless ways for the body to hold x sticks in a static position, which can be combined with both.
Look forwards to seeing people passing silly numbers of staffs through the air and or surfing thier bodies.
I often get comments poping up when I start doing triples contact but I am very messy and very much learning this stuff still. I think it is important to be bold in playing and allow your body to attempt things that you have not learnt yet. For me this element of unkown adds a thrill to the dance and can have a sequnce of tension and release not unlike a nice jazz line. Or maybe I'm just a tripper

Just thought I would mention that because when I play multis I am often well out of control, but often still comfortable. It seems to be more a way of coming at it then a particular trick or style.
So no text decriptions

BUT, a vid is in the making 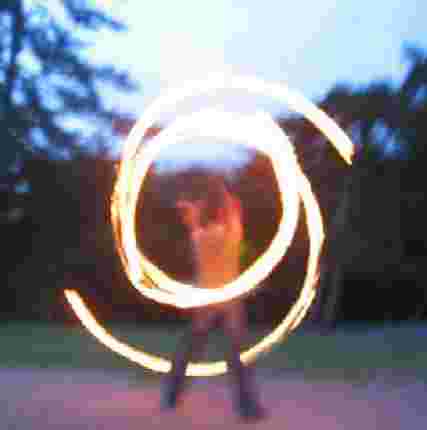 Posted: 24th May 2005
I found a badass way of manipulating 3 & 4 staves (spinning, no contacty stuff) just after coming back from uberstaff

I'll show it to ya if our paths hit somehow this summer ( uberpoi, play, psyfest: sonica ..), and when I'll get a video sorted

Posted: 27th May 2005
Im thinking all the two stick moves with the third stick as high throw must be possible- and some day I'll actually trust myself to put this into practice. I'm also thinking a lot of club juggling patterns should also go with three staffs- though juggling with clubs is a hell of a lot easier!

'There are two mantras in life, yum and yuk. I choose yum.'

Posted: 14th Aug 2005
I'm bringing this thread up, as it should be THE multistaves thread

it's been a while since I'm supposed to post this, but I was away from Paris, lazy, and swamped with other things.
I wanted to further edit it before posting, but I couldn't find the time for it. And as I'm leaving tomorrow for one month in India, I'd better post this like it was previously edited (sketchy), rather than in late september

A VIDEO IS BETTER THAN A LONG TEXT

with the " triple-cross " you can do virtually the same thing as with double staff
I've also tried the trick with 4 staves and ended up with what I called dual-plane isolation :
having two staves isolated and the two others spinning a standard pattern in a different plane

I've been improving this since the video was shot (june), and presented it in some Italian conventions gala .. but so far no firey video yet
I'll do my best to shot this, on fire, in Rajastan

If you comment, don't expect much response from me before I'm back from India, mid-sept.

ps>I sent it, before posting it, to some random dudes. I've forgotten half of my mates

. So sorry for the ones that heard about it but didn't get it at the time ( Nate

ps>I sent it, before posting it, to some random dudes. I've forgotten half of my mates

i was going to post it here myself - but figured i should wait for you too, as its yours

Posted: 17th Aug 2005
Been practicing my staff on staff action using 2 sticks. just like a devil stick spinning one staff around the other...

and balancing 1 staff on the other in a cross and spinning them both only holding the bottom staff.