Was just curious to see how people were going with playing with and thinking about these kind of moves. I for one am still trying to come to grips with ways to think about them and thought a little discussion might be a helpful thing.

So, what is all this spin stuff about anyway?
It has nothing to do with the world of PR (or the undergound Brotherhood known only as Anti Spin that fight it for that matter). No it is all to do with horizontal (for the time being) contact, and the ways that you can move your body in relation to the stick. MCP describes this quite well in that big tome she is working on. The idea here is that you can take the same contact move and make it appear very different by using different types of spin. You can also perform parts of a move with one Spin, then finish it with another. For the sake of this thread here are all of the possible combinations, as they exist in my head at this time... Please feel free to advise better lables. I am sorry if trying to class or catch it all like this seems silly and technical to some ppls, but I know for myself it is fruitful thing to do and I hope it will help me to play more with these wonderful dynamics.

Spin
Stick & person spinning in the same way, with the stick going slightly faster then you.
Makes moves easier as you have more time. When done smoothly can create bit of a slow motion effect.

Anti Spin
Stick spins one way, the person spins the other.
Quite tricky but feels and looks very juciy. Very hard (but very possible) to in longer sequences without slowing or stopping the stick.

Static
Stick not spinning, Person not spinning.
Have not really done to much with this. Seems very hard. I am sure a master mime could do wonderful things though. Everything you can do here (arm rolls for example) you might find easier if you take yourself in circles; which leads us (in a roundabout way) to:

Static Spin
Person and stick both spinning in the same way at the same speed.
This is by fair the easiest of the spins and is very handy to use as a means to regain control of am otherwise botched sequence. If you placed the stick on your back and just turned around and around that would be one example of Static Spin. Some moves (steves for eg) cannot be done in this spin, which brings us to:

That Spin Used For The Static Steve
Person spins, Stick does not.
Wish I could do Static Steves...

Super Spin
Person and stick spinning the same way, the person going slightly faster the the stick.
I just started doing this and it is messing with my head. It feels a bit like you are doing Anti Spin backwards. Which I guess you kinda are. ermm

you see what I mean.

Well I feel better having written it down. Hope some of it makes a bit of sense

Written by:
It feels a bit like you are doing Anti Spin backwards

although im not even going to try to work that one out in my head...

Dr_MollyPooh-Bah
2,354 posts
Location: Away from home

you've made my head spin Kyle - does that count?

the term anti-spin is cofusing for us poi'ers tho, cos we are just using it for another concept.

p.s. cor look at that, im posting in staff moves! been a while!

actually, I just read it all again andit makes sense. I am having some sticks made.......

Glad you guys like this stuff, l am keen to hear what you do with it.

Meanwhile a sad update on my state of affairs:
I was having a laugh to myself thinking about how this spin stuff might relate to lightbulb jokes and that made me think YES!!!!! THAT IS IT! Merry-go-rounds!!! (that is kinda the way my mind tends to work). Think how fun it could be. Think of all the possible spins a three tier entity could have...

So I am now wondering the wastelands of Eastern Germany in a fruitless search for merry-go-rounds. Where did they all go? There must be some around!? Was it political? did the communists tear them all down? I feel lost and in need of the truth. 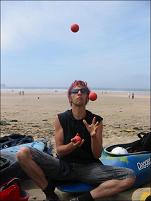 Written by:
That Spin Used For The Static Steve
Person spins, Stick does not.
Wish I could do Static Steves...

damm it thought i'd had a new idea

p.s. The only merry-go-rounds i've had the pleasure of speaking to were very right wing so i wouldn't be suprised if it was the communists

Maybe I should change this too something abit nicer, humm no I still think your all C

Posted: 29th Oct 2004
So I noticed that there was no mention in my first post of when the stick spins and the person does not, but I guess that can be thought of as normal and does not really have a need for a label (although it brings to seven the total-amount-of-spins-that-I-can-think-of-just-now) . And as for MollySpin(tm), well it is lots of fun but maybe not one to do on fire?

The superspin version is a bit strange as the stick is spinning the wrong(?) way. Ie to do one from right hand to left, the stick is anticlockwise.

The only difference is which way the stick is spinning.
T&B,
I did not think of static steves untill I saw MCP talking about them, which was about ten seconds before I saw her DOING them.

Posted: 29th Oct 2004
was that not a conversation that went like this:

Well you know, you can do static steves...
Really?
Yeah, like this...

Posted: 30th Oct 2004
Len came up with anti-spin fishtails yesterday - and they are just about do-able, one way at least... Stickspinning backwards, with hand doing forward fishtail motion.

Len: Hey, y'know, you can do anti-spin fishtails!
Durbs: Yeah?
Len: Yeah Like this...

Dr_MollyPooh-Bah
2,354 posts
Location: Away from home

Len: I think I nearly got an anti-spin fishtail
Durbs: Don't be mental
Len: No really
Durbs: Hmmm *tries it* Oh yeah... There's something there

Non contact or using more then one contact point.
You can be a bit more free to mess around with the movements if you are not having to worry about the stick. Try isolating limbs and toes and things like that. Contact can also be made more stable by having more then one bit holding the stick up. A nice one to try is to cross your arms and put the stick on top of the backs of both hands, both off centre. Now try to rotate the stick so your arms cros the other way.

Reverse thingy
Try doing the same move in AS, then in SS. So with a steve for example, the stick goes from right hand to behind your neck to left hand. It then goes lefthand, back of neck right hand. All spining the same way

Contact catching
You can throw the stick and start your spin before it comes down. I think I like antispin a lot for this.

More sticks, more spins
Lots of things to be done with more sticks. Try doing anispin one way with one stick and static spin with the other going the other way. Then swap them.
Have lots and lots and lots of fun...

Posted: 28th Nov 2004
*jaw drops* and i thought getting started with shoulder neck shoulder type stuff was gettin some where.

Drawings by chalk minds, strech between the stars

Kyle Mclean-
Contact without dance is like sex without wiggling.
A) it does feel as good
B) it does not look as good on film

Posted: 8th Feb 2005
you kids amaze me. Iife has pulled me away fom practicing incessantly, so i stopped checking for new moves here. I come back a few months later and you're re-inventing the wheel.

Thanks for doing that.

I must get myself to england or Oz. America has very few contact wizards.