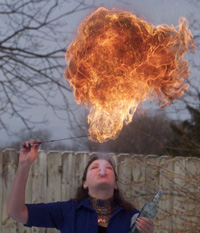 Lynne Couillard (AKA Pele) eats fire; she also is a snake dancer and writes for Internet.

BATAVIA - Lynne Couillard has made a career out of her burning desire to excel at the offbeat. The lifelong resident of this Genesee County city makes a living as a part-time reptile specialist at a local pet shop, a writer for three Internet sites, a belly dancer, snake dancer, and, last, but not least, as a fire dancer, eater and breather.

She wowed the audience in her first fire arts show Jan. 12 at the Blue Cross Arena at the Community War Memorial in Rochester during the Coldrush winter festival. She danced and twirled flaming torches, then put them in her mouth. And she breathed fire by spraying a mouthful of fuel over the flame of the torch.

Early in her fire-breathing career, Couillard was confused about how the audience perceived her act. She would end a half-hour show and there would be no applause. It turned out that the crowds were simply frozen in awe. ''I think it's amazing to look at,'' said Couillard's boyfriend, Mark Blance. ''I'm an office worker at Xerox Corp. I live like (comic strip character) Dilbert, so it's very nice and exciting for me to have a girlfriend that does things like this,'' he said.

Unfortunately, Couillard's parents are not as thrilled by the fire-eating. ''When I first told my mom, she turned lily white. They don't come to my shows, and I think they're fearful for me . . . They've seen photographs, but they've never actually seen me do it,'' Couillard said.

Couillard is a 1991 graduate of Batavia High School. She studied theater arts and literature at Genesee Community College.

As a child, she was fascinated by magicians, carnivals and circuses. ''I used to pretend to be the lion tamer or to be the tightrope walker a lot. . . . I was very much fascinated by the people who chose to put themselves in those positions,'' she said. ''There were people who worked at a skill so diligently that they became recognized for it, and it was always something very unique, and I thought that was just amazing,'' she said. She tried her hand at magic and Juggling. ''I found that I'm really not good at those,'' she said.

She spent six months researching Fire Eating and dancing, then six months practicing before starting to perform about 18 months ago. ''I get asked continually if it's cold fire, or fake fire, or if I put something in my mouth or on my skin so I don't burn, but there's no such thing,'' she said. ''It's literally exactly what it looks like. I take a flame and put it in my mouth,'' she said. If there is any ''trick'' to it, it's knowing everything about fire and fuels. ''I have my timing down. . . . Human flesh has a 5-second leeway point before it starts to burn,'' she said. Of course, the head start only applies to a flame, not hot metal, for example.

She burns lamp oil for most of her show. But she uses white gas (Coleman fuel) to do trailings. That's when she slides the torch across her skin and the flame is left behind on her arm for a moment. She can do that because it's the fuel burning, not her skin. And it's burned off before her skin burns.

''Most people think I'm crazy,'' she said. She did her fire-breathing act at the St. Bonaventure Renaissance Fair last summer, in addition to her duties as a troupe actor there. And Couillard was Maggie the Match girl, selling pre-tested matches on the streets of Skaneateles, Onondaga County, during the Dickens Christmas festival. It wasn't very hard for Couillard to get bookings after she signed up with Jim Richmond, director of talent at Pelican Marketing and Management in East Rochester. A few minutes after he received material from Couillard in the mail in the fall, he got a telephone call from someone seeking a very visual act, and she was booked. About an hour later, a Rochester city official called and she was booked for the Coldrush event.

''I really believe there is a strong possibility for her to make a strong living off this,'' Richmond said. Couillard charges a few hundred dollars for a simple show, but her rates depend on the job. ''Lynne has always been a top-notch, top-quality performer,'' said Steven Dornan, producer of the St. Bonaventure fair and former producer of the Dickens Christmas event. ''Children, most of all, seem to get totally lost in watching what she does,'' Dornan said.

But Couillard, who has a 6-year-old son, Noah, understands she has a responsibility to emphasize to children in her audience the safety precautions she takes. ''When I first started, (Noah) said that the fire scared him. Since then, he's kind of nonchalant. To him, it's no big deal,'' she said. ''It's very difficult for him because in school they teach fire safety, and then he comes home and he sees me doing this. He actually has his own set of toys that are not flammable. I'm teaching him to do these things without the fire,'' she said.

She has explained to him all the safety measures she takes - having a fire extinguisher and heavy blanket nearby in case she has to smother flames. He sees that she practices without fire. He also joined her at a meeting of about 20 fire breathers in Vermont. ''He saw that everybody there did it very safely. We all sat down and explained it to him and said we don't get burned because we practice, and we did a lot of reading and talked to a lot of people, and it kind of sunk in,'' she said.

Reprinted with permission from the Democrat and Chronicle

Photo: Lynne Couillard spits a flame into the air while practicing her Fire Breathing in the back yard of her Batavia home.
SHAWN DOWD staff photographer