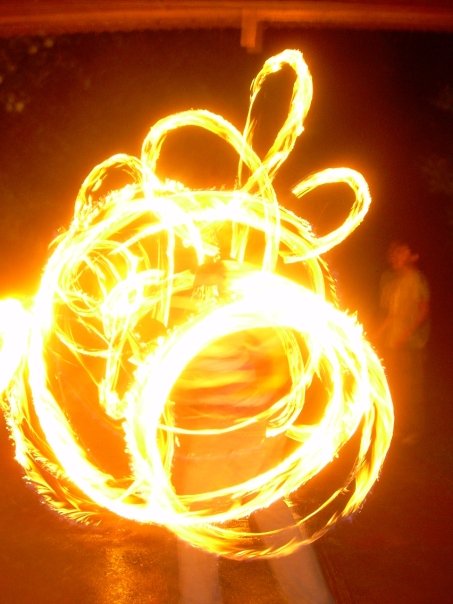 Posted: 20th Feb 2010
Over the past nine months or so I have been travelling. With me I have been carrying a blazelink break down glow staff. It has served me well and been ideal for doing what it says on the tin and breaking down to fit in my bag.

Although over these months I have spent hours practicing none of it has been very strict and I have left myself quite sloppy when I review footage of myself spinning. Partly I think this is down to weight and wondered if any of you would agree.

During these past 9 months I have become much more involved in contacting, which I am aware that you ideally need a longer heavier staff. With my blazelink I have managed to get moves like steves, angels and pivots down but when I watch them back over it looks more like the staff is dictating my movement insted of the other way around, obviously practice and more practice will solve some of this, but do you think that using a heavier staff will also allow me to control the staff better as I will be able to get the momentum from weight as opposed to speed and the weight in itself will keep the staff stuck to me a little better than some slightly OTT body movements.

Posted: 20th Feb 2010
Longer/heavier staffs (more weight at the ends) do make contact significantly easier. I started contact on a really light weight aluminium staff, and when I switched discovered I could suddenly do all the things I was struggling with! Magic. So easier yes, not necessarily better...

I'd say try different staffs and see what works for you. Recently I bought a fibreglass 160cm staff because my staffs always get bent when I leave them in the middle of a field and they get trodden on. This one is pretty heavy and fairly indestructible (as demonstrated quite forcefully by Cami as I stood biting my knuckles and squealing ever so slightly).

HOWEVER I find it a bit too heavy - I assume this is a necessity of it's indestructible magnificence. It's a lot harder to dance with - direction changes, locks, plane changes are more difficult and have resulted in strained wrists a few times. Also harder to move to faster beats (as in beeetz...) with things like one beats - think this is more length than weight. Doing super slow contact is all good most of the time but it's difficult to speed up, unless you go into it fast.

Things to think about. I'm sure someone else will give you a much better physics based explanation concerning total weight, weight distribution and length in terms of their effect on momentum etc. Though I think if your staff is longer it equates to the same thing as ends being weighted... oh yeh, that's really obvious now. OK, hence, leaving to someone else.

In terms of staff control and body movement, general tidying up and make-goodness, as you said - practice! Having a smaller staff will just take slightly more practice. But with enough time and effort you can get perfectly smooth contact with a small staff... devilstick... pencil... well, maybe not. But one day someone WILL fishtail the atom. Probably not me.

Posted: 20th Feb 2010
Cheers for that zaz, I just ordered one of the 150cm fibreglass staffs, arrived today, but they sent it with the silicone grip which I didn't want so will have my new staff on monday. I span the new one a little bit to see what the weight was like and already I can see what you are saying about the one beats and plane changes.

With regards for the contact though it is alot easier to allow the staff to spin over me without having to contort myself around it. Also the extra weight allows for much better feel of where the staff is, so I don't have to make ninja speed movements to catch or avoid the staff end which I thought was a little further away.

It's obvious that it's going to take some getting used to, any new staff will. First thing I did when I came home was pick up the couple of staffs I had here which I havn't used in ages, both of them felt alien to me and due to the lack of grip I was used to shot off my shoulders/neck in seconds.

I'm looking forward to spinning the new staff as I already know it will smooth out some of the issues I've had with keeping the staff in contact. I'm also pretty sure I will find things to complain about also, but we can't have everything can we.

I think my main problem with my current staff is that when I try to slow down the movements to really think about what I'm doing, where my arms are, where my feet are etc, I no longer have the speed to get the light little thing around the move. And doing it fast brings on the chance that I will knock the teeth out of my head thats now looking at my foot posision.

Cheers for the advice either way.

Posted: 20th Feb 2010
Not seen you round these parts for a while Zazie!

I think length really affects movement when doing contact, the extra length creates a much more stable base, you don't have to be as exact. As for weight I keep swaying from preferring light staves with all the weight in the ends, to heavy fibre3 style staves. Each has movements that feel really subtle that with the other have to be much more concious. e.g. Angel rolls just happen with the fibre3 where with a light staff I have to consciously give it a bump with the shoulder, while fishtails are easier with the lighter staves.

As for how it affects the way things look, personally, with a fibre3 I look more terrified than anything else!

Posted: 20th Feb 2010
Yeh I got a fibre 3 in the post today as I said above, I had ordered it with the hockey stick style grip though as the silicone grip scares me with its major lack of cushioning. So will have my one on Monday. With the little bit of spinning I did with the fibre3 it is as you say, things like angels are so much easier and I don't find myself trying to do anything to make the staff stay in contact. Same goes for steves, plus the extra length gives me abit more stability which is an added bonus.

Will see how it goes I guess, I think another part of me watching my videos is the same as looking at a photo of yourself and saying you don't like it. At least now with the extra weight of my fibre 3 I will be able to feel the thing while I'm wearing a jacket, forgot that this country is far too cold to be staff spinning. BRrRRrRR

"to a man whose only tool is a hammer, the whole world looks like a nail." Abraham Maslow

Posted: 25th Feb 2010
Fibre 3's are easy to use, but you have to have a certain amount of strength, the biggest plus with them is the fact that because they are fibre cored and bend self straightens, You don't really need all that much cushioning unless you are planning to catch into contact the flex of the staff takes the worst of the force (although you have to be pretty smooth to stop getting bruises)

Always remember that it doesn't matter how heavy the staff is if it isn't straight then contact will be more difficult - steves and rolls will bounce more which is why I like the fibre 3 it's been dropped but the flex prevents any lasting bends.

if you CAN contact a lighter staff I would say do so, but all staff spinning has to be based upon the physics of turning moments - length of staff, weight, weight distribution and speed etc. heavy staffs are good for contact or a constant speed spin, if you want to change directions often or change speeds quickly definately use a light stick because the momentum of a heavy stick is hard to stop.

I'm getting to the stage now where I can contact a flower stick in all but the roll moves and the matrix so it shows weight is good for learning but not essential for performance.