Question: I am making myself sick from getting dizzy from trying to figure out a sequence. To turn my body around to face the opposite direction, while maintaining the poi in their current rotations.
Which hand leads the turn in which direction? (Hi and/or Lo), and what is the other hand supposed to be doing in the transition?.
I can do turns to the L & R (Hi & Lo),But I can't wrap my brain around turning in a counter spinning situation.
If you can suggest a proper movement term or a video, I would be grateful!!
Looking forward to the suggestions

Spinning makes the world go round

I think your trouble arises from trying to move only the poi when what you need to do (if I understand you correctly) is move your body along with your poi. Try this:

1-with poi moving in the manner you've described, turn 90 degrees to the right. (Keep poi spinning one in front of you, the other behind).

2-moving both poi at the same time, swing right hand up (front) and behind you on down swing AND swing left hand down (behind) and swing in front of you on the way up. Once the transition is done, keep spinning. [Most times we're so amazed that the move happened the we're like "wait, what was that", stop spinning and then we're all confused... Just keep spinning, you'll figure it out.]

3- turn your body another 90 degrees to the right to complete your 180 degrees turn.

If you are familiar with the wave, this is basically doing a half wave. Should you keep swing both poi back and forth after the first 90 degrees turn, it would be the wave.

Hint: to turn the opposite direction from starting position, it is the same principle but it would now be the low wave, so don't freak (like I did!!

) because in one half turn your hands are high and low in the other. It is absolutely normal.

Duct tape is like the Force: it has a light side, a dark side, and it hold the universe together. 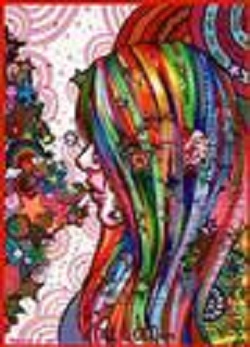 Posted: 19th Jul 2008
I'm so new at this i'm still shiney but I found that spinning just one poi at a time and sort of walking around and through it....sheesh, that doesn't make a lot of sense in words....don't know how to put it...just spin, spin, spin. Love the low turn/ high instructionals in beginners 2 on this site.

Your vibe attracts your tribe.