Posted: 19th Apr 2006
Hi guys I am working on a movie this weekend. We will be operating for the most part in darkness. I need lighting options, both for light and for effect. Do people have torch or pot designs they find effective. I know of firepoise's design. I have already made some torches....like one sided staffs.

One concern is more fuel effectiveness. I know for example that the torches will probably burn bright and be fuel heavy....

I am working with camera and lighting specialists but does anyone have any further insight into using natural (fire) light to shoot?

Does anyone have any advice on the lighting, torch things... any good products they know of for lighting darkness in remote places?

Posted: 20th Apr 2006
Hey bro. Youve see my tourch's ay. We usually need between 4-6 and even then the light is not really good enough (even if ur holding a staff). We use a bon fire and somewhere with no wind (or little) because ur tourchs will get blown out.

If you had a power source then you should use electric lighting; or concider a generator or gas lamp(s). A semi big bonfire is the only good way we can shoot on the beach at night. Wind being a main problem.

Just realised you could get some kevlar rope (or scraps) and make a ring!

Id be interested to hear other peoples ideas as well....

Posted: 20th Apr 2006
you could try parking a car near by and turning the lights on full beam. you wouldnt need it direct on because car lights have a very wide dispersion...

Posted: 23rd Apr 2006
Yeah, we are currently messing with torch designs... what has worked for us is wrapping a rod with burlap or natural bailling twine. We make the wrapping about 6-8" long and about 2" thick all around. If you soak these in Colemen fuel for about 5 minutes, you will get a very bright torch that should last about 10+ min, long enough to get a couple of takes. You will need several torches to get enough light. If you spread caulk (like for waterproofing around windows) on the first couple layers, wrap over it, then soak it, the torch will dim down, but will last closer to half an hour.
Hope it helps, and good luck!

Posted: 26th Apr 2006
I know that this is late but getting he colour balance is essential on the cameras. Being that far off Tungston or Daylight will cause colours to be really thrown out. If there is any other light make sure it is corrected some way towards the torch light due or it will look really odd.

Continuity is more important with this sort of situation as the position of a flickering light is much more obvious than a static one. Here it gets tricky but having a good DOP and lighting guy (or any) really helps. Overlighting it can also be better for the camera than underlighting, rember when working with video it is possibly to go back and colour correct it, crushing the blacks eliminating shadow detail will make it look darker than it really is, if it's too dark you end up using gain which will look grainy but bright (unless you want the look). Adding grain later is always an option but getting rid of it is almost impossible.

As for constructing torches it will depend on the script as to what you can get away with and how long the shots are will also affect this. rember your actors need to carry them so if they get too heavy your got a problem. if the shots are short then weight is less of an issue as they can be redipped between takes. Weight will also add to the safty issues as the can be hard to handle.

I wouldn't recomend using a liquid fuel burning directly in a pot or otherwise as it can be knocked too easily esp when on a set and will spread rapidly, although this can be effective for large amounts of light for a short period ( using a shallow tray on te ground) But would generally avoid it.

Lastly hae at least 1 person whos only job is fire safty, if they are worring about cameras and equipment or scripts it's too easy to be distracted.

Just as background, I work in TV and Theartre as a lighting designer and have used flame as a light source several times, it can look great but is VERY hard to work with. Good luck

Posted: 5th May 2006
Thanks for your ideas and effort guys! 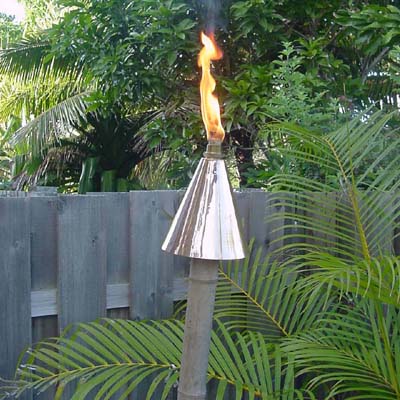