Posted: 9th Mar 2005
so ive started a local fire night. the first night was last sunday. we had about 15 show up. many have experiance. the problem is most ended up chatting and hanging out rather than playing. 5 out of 15 actually picked up some toys. anyone have any ideas on how to motivate people do more participation rather than spectating? the inexperianced people id like to focus on most. they seemed uncomfortable doing anything but watching. i realize that it was the first night and people were finding there place but there must be something i can do to keep the focus on spinning.

Posted: 9th Mar 2005
Try running an informal workshop? I've never run one, or organised a fire night for that matter... but there's one every week at Spitz, and it seems to go down well... try along the lines of ' anyone interested in a workshop on butterfly variations', or something for staff?

Best I can suggest till some more experienced organisers show up

The optimist claims that we are living in the best of all possible worlds.
The pessimist fears this is true.

Always make time to play in the snow.

Posted: 9th Mar 2005
What you have noticed seems typical of spinners that I've encountered as well. But, unlike you, I'm never sadden by that. The whole purpose of spin sessions (as far as I'm concerned) is to get to know other people, maybe learn something new, and to watch other spinners do their thing.

That being said, I organized a monthly spin gathering in town for at least 2 years. Since it was held in the backyard of a local bar, we expected people to socialize. No one was ever forced to spin. They spun if they wanted to, and with whatever toy they wanted to - whether it was fire, glo, or some variation of practice poi that was up on the stage. We were always quite happy with that. And if there was a lull in the evening, so be it. We all need a break at some point.

How did you describe the evening to others when you sent out announcements about it? Maybe you could change the wording to get it to be less social? I've found though that spinners like to chat with each other.

What were you hoping to get out of the evening? Did you just want to see other people spin fire? Did you encourage the newer folk to spin non-fire things that maybe they were more comfortable with? Did you have music of some fashion provided that everyone would like to spin to? We usually have a DJ that plays an eclectic style of music (which I personally love), but if someone has something specific they like to spin to instead, he will happily play that for a song.

Posted: 9th Mar 2005
yeah, I agree about people being encouraged to spin other things than fire. In some ways the 'glamour' of fire can take over and put people off having a go at spinning. We have a jam night here that is very very successful/ongoing where noone uses fire at all . So beginners feel very relaxed to go up to more experienced people and play with poi, ribbons, juggle stuff, contact staff and balls... whatever. The skill level is still obvious for the good folks. And it's very interactive, people working together on moves. Fire can make you unapproachable. In our town there is also a more 'fire oriented' Moonfest .. (YAY precious Moonpixie!) and there are loads of people who watch/ socialise.. maybe never get up, but still support the scene by loving it....

Posted: 9th Mar 2005
Ooops,. all those pretty gremlins were meant for Moonpixie!!!

And everyone who juggle jams and moonfests!

the meets in clapham common always start in the afternoon, so theres plently of time to socialise and play with non fire props before the sun goes down and the fire comes out. a good workshop and some spining in the daylight will encourage peaple to be comfortable spinning with peaple who may be better than them.

Why IS this in Events and Gatherings?

Posted: 10th Mar 2005
but he wasn't asking for HOPpers to attend his event, NYC, so I don't really understand why it got moved here. He wanted to know how to make people actually spin instead of just standing around chatting.

Posted: 10th Mar 2005
Yeah, I was thinking that events was a weird place to put a thread asking for motivation advice, not informing people of an event, but hey.

The optimist claims that we are living in the best of all possible worlds.
The pessimist fears this is true.

Always make time to play in the snow. 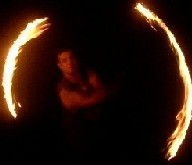 Posted: 10th Mar 2005
You could always invent a poi drinking game. Might want to stay away from fire toys for that one, though.

I agree with the idea of using flags or fuzzies up until dark to get everyone comfortable with eachother's skill level before breaking out the fire. I think that would help a lot. I, too, have noticed that many people are reluctant to spin if they feel that their skill isn't up to par.

Obviously it's not about outdoing eachother. These people could learn a lot if they were to loosen up and spin. There is no better way to learn than practicing while watching someone else.

But hey! It's also likely that the people who just socialized last time will feel comfortable enough next time to spin a bit.

We create a new world order, one of beauty and grace, color and sound. There is nothing more vibrant or full of life than the roar of fire tying knots of light around your body.

Posted: 11th Mar 2005
Try passing a couple of J's around(Not to the young one's like) I love to do that at the Manchester meets!

*Thats one of my favourite Nurseries over there,*

Roman, Trippie Hippie,On the way back from Play Festival

Posted: 12th Mar 2005
thank you all for your great advice. im going to make a bunch of glow sock poi for people to use. maybe some glow staff as well if i figure it out. i definatly dont want people spinning fire untill their ready. im also not going to worry about it as much. i like the mind set of if they want to spin they can spin. i guess i was just worried that people wernt spinning because they felt uncomfortable. chatting can be a great thing too. thats how great ideas are born. its nice to see fire nights go pretty much the same no matter where in the world you are. thanks again for everyones input.

Posted: 15th Mar 2005
I don't know if this will help you or not, but I made some practice staves this weekend out of PVC, tennis balls, and electrical tape. They're well balanced, light weight, and extremely inexpensive. I had some samples of that tribal dance paint left over, and smeared it on the tennis balls. It looks wicked in UV.

We create a new world order, one of beauty and grace, color and sound. There is nothing more vibrant or full of life than the roar of fire tying knots of light around your body.