Posted: 12th Aug 2004
All the basic fire twirling moves that can be done on your own, can be done into the space of another twirler (assuming you are both well aware of what the other is doing!!)

A few of us have been working on doing moves like this... The easiest is your basic figure of eight to one side with another twirler facing you and them twirling a figure of eight to the other side, so you are both in ONE circle of fire...
another is doing dual stick butterflies with one standing twirling high and the other on knees twirling at knee height.

What fun stuff for 2 or more people have you guys seen or tried???

Posted: 12th Aug 2004
what i find really beautiful is when couples embrace with one arm free each to twirl a toy, so that it looks like two are the one twirler.
obviously it looks alot more elagant than my description!!

Posted: 12th Aug 2004
There was some pretty nice, or nice and pretty, two people moves in the palitchi promo clips that were posted here a while ago

Posted: 12th Aug 2004
There was a lot of 2person stuff going on at Falmouth - im currently playing with footage but there was a 2man 5beat weave by Bug and Rossco - some staff duette moments along with other stuff which will be available for all to see very soon

Posted: 12th Aug 2004
ooh, its all so much fun : )
bender- I know the kind of moves you mean, we do a lot of those in our troupe, a nice one for people who are comfortable with each other is when you stand face to face with your arms around each other twirling behind the others back.
I would describe a couple of others but they seem so hard to put down in words!

Posted: 12th Aug 2004
wait a minute.... was it _your_ troupe that performed it so nicely at the last rainbow serpent festival?! new directions in twirling is so ace!

Posted: 13th Aug 2004
That's entirely possible, I wasn't there at the last one but "Cyberfire' do most of the festivals around : )
When is the next rainbow serpent festival anyway???

greenant holds the RSF party.
they recently ran a party 'Blue Crystal Storm' (Dmitri, Legohead & Saikopod played!!) where Pyroptix performed - he's the best doubles twirler i've ever seen in real life or video. I learned so much from him and still do much!!! he basically taught the guy that taught me staff!!

Posted: 13th Aug 2004
hehe! were you at Blue Crystal Storm Bender!!? So were we! Dan's doubles are sooo smooth! twas nice to watch

er the group that performed at rsf last year was a Cairns mob, Fusion Fire Tribe I think.

Posted: 13th Aug 2004
I hallucinated that i saw yoo, (a smooth poi person on the main dancefloor) but now i realise the truth! there's a munted photo of me at inthemix.com.au
ozzy rocks! dmitri performed the bestest prog mixing i've ever heard!!

Posted: 14th Aug 2004
On of my favorite 2 person twirling moves is one person standing in front of the other doing the windmill at oposite timings... So one's person's up, the other down, then the first person down, the other up... hope that makes sense. It looks goregous and it's so easy.
My other favorite is kinda tricky... 2 people stand back to back, and you begin by doing a figure of 8 with 2 spins on each side, then you continue the move as if you were going to spin the staff behind your back, but in fact the other person takes the staff from you, and you take theirs. You keep going, and the result is that you are both encased in a swirling ball of circular fire trails. It's great fun, but takes a LOT of cooperation.

Posted: 14th Aug 2004
yep, I see what your talking about : )
I think I have done the second one you mentioned, ( it needs a little practice to get it smooth). There is one v. similar one too where you stand back to back, do one full spin in front of you and then bring the staff up to do one full helicopter spin over your head. your partner does the reverse of this so that one person is spinning to the front, and one person is spinning above.

Posted: 10th Sep 2004
I have some experience in drum corps where they spin flags, rifles, and sabers. I've seen a few interesting things done with two people.

2) Two people who are spinning stop their spins stand about 10 feet away facing each other and toss their staff flat in an arc w/o spins and they catch the other's staff.

3) I saw this one done by the marine corps rifle squad, but I'd imagine it'd be very possible with a 2 staffs shorter than 5 ft. Two people stand very close to one another then toss the staff the other other person simultaneously, and when they ctach it they pass behind their own back and continue with as many tosses as they'd like. They can add as many rotations as they want to the toss.

There's one more I've been waiting to try where two people use one staff that's constantly moving between the two of them with tosses, if they both stand sideways facing forward you can pass bac and forth constantly, but I've never seen or tried this one.

ANyway, sorry for the late respones, I just rejoined this forum from a long time ago and never saw this thread till today. So I just revived a dead thread, oh well. Hopefully I helped someone.

Have you seen the Soy on Everything video from the Rubber Heart Duo. They have some sweet moves you might like.

There is a link to their website in the vid section, check it out.

ps, i really like the first on you psted there, if you had both people pirouetting at the sametime it would look crazzzyyyy

Posted: 10th Sep 2004
You're absolutely right. That Rubber Heart Duo was amazing. One day I'm going to have to rope a flag corps/marching band person into fire so we can do stuff like that.

Posted: 26th Sep 2004
another move that hasn't been mentioned is when you stand facing each other but a couple of meters apart and do a corkscrew over your head and in front of you but at alternate timings so it looks as though you are both doing an lunge at each other...

Posted: 26th Sep 2004
It can get really tricksy too when you both have dual staves and you do double figure of eights behind each others backs *note* You need SHORT sticks for this!!! 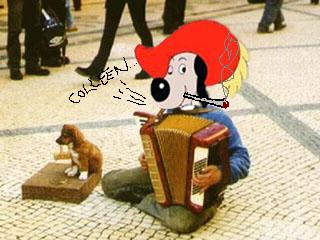 Posted: 23rd Oct 2004
Hey has anyone ever tried to exchange staffs...Quite complecated at first but looks ace when its done..
Stand at a slight angle from each other, do a figure of 8 then throw the staff. It works best when you throw the staff so that it roles over your thumb and you step through as it gives it that extra push. (rem to work out who throws high and who throws low as otherwise they just knock each other).

There are no stupid questions, only stupid answers...

Posted: 28th Oct 2004
ive only ever seen two people doing a figure of 8 together behind each others back.. at the last rsf... it looked really sweet and seemed really hard (hadnt started staff then myself yet) then i tried it and its actually surprisingly simple, as long as its coordinated..

i need to try the second one piper was talking about, exchanging staffs standing back to back.. doesnt sound diff, but who knows? :P

Posted: 28th Oct 2004
really cool move that Myself and one of my juggly friends discovered is that when one person juggles, with every fourth throw a high one, the staff twirler can stand behind them and do a single helicopter between the hight throw. looks great

Posted: 29th Nov 2004
I was trying this move with a friend of mine yesterday. You stand 2,5 feet apart facing each other, slightly off-center so your right shoulders are opposite each other. You each make outward figures of eight arround your right side, timed simultaneously. Now coming to the front, move your arm inward and forward, timed so the staffs cross when they're vertical (otherwise they'll collide). Let your staff roll over your partners fore-arm and then move your hand inward to catch the staff rolling over your own fore-arm and then pass it behind your back. Take a step to the right and repeat the process with your left hands.
It's very tricky timing, but it's a great move.

No, I didn't mess up, I intended to catch fire.

Posted: 29th Nov 2004
another that would be well worth a shot and i know ignus and i tried it, with little success might i add due to the lack of timing, is the following..

again, face each other about a meter apart, one with doubles doing figure of 8s outwards, the other with no staffs.. then as one hand (lets say right) comes round to the front, the person facing you takes it over with their left hand just as you are about to bring it back again, and the left hand follows similarly so the other grabs it with his/her right, and then pass them back again.. not as much timing is involved as in the previous post, but a more accuracy when grabbing the staff..

burningoftheclaveySILVER Member
lurking like a ninja with no camouflage..
926 posts
Location: over yonder, New Zealand

my friend and i pass round the back of each other in various ways and i do a cartwheel type thingacross his back holding my staff whilst he weedwhacks..

he also does capoeira but i cant find any classes near me so any tips involving that would be welcome.

on spam robots - "Burn the robot! Melt him down, and then we can make lots and lots of money from his shiiiny juices!"