Posted: 20th Mar 2003
Tomorrow night, 21st march Dangerboy and I will be performing our latest work to the bondage/leather pride scene of Sydney at the Hellfire night, Icebox nightclub Kings Cross.

We go on at midnight and the show will be sexy, nasty and o so pretty to look at.

Posted: 20th Mar 2003
I have seen the rehearsal of that and can only tell you this :
those two together are AMAZING
You are beatiful when you dance, Flash...
and you are sexy mister DBoy

but let us not spread the word too much, we do not want to oversize their gorgous egos 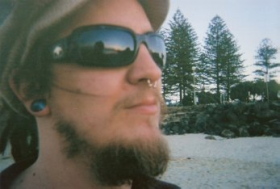 Posted: 21st Mar 2003
flashy will be there with my cam to get pic so can send you some cass when i get them done

Posted: 21st Mar 2003
Will you guys be regulars at hellfire?

Can't make tomorrow night, but hope to get there soon now it's back.Would love to catch your show!

Hope all goes well, I'm sure it will be fabulous!

Posted: 21st Mar 2003
Let's see, that's about 8 AM my time right? I'll be sure to daydream about it while I'm in my staff meeting. But it probably won't be as good as the real thing.

Posted: 21st Mar 2003
oooh, i wanna go! me wanna see pretty fire girls that can make their eyeballs do funny things and project their thoughts and "is really talented with her feet"


-Such a price the gods exact for song: to become what we sing
-Seek freedom and become captive of your desires. Seek discipline and find your liberty.
-When the center of the storm does not move, you are in its path.

will be there in my feral fairy best

wish i had been there

how about your spanking brains? do we get to see pics of that too or justof the welts it left lol!

so how is the new hellfire? sydney needs more fetish parties!!!!

The venue was packed so we had to shorten our performance space and as a result eliminated a lot of the combat-type moves we had rehearsed... But the audience LOVED the show - we were being cheered the whole way through it.

SONG: Nine inch Nails: Pig. (track 2 Downward Spiral album)
Started out with DB dragging me by a chain through the audience to the performance area; he then dominated me a little and dragged me over to where our toys were laid out. I then was made to present him with his lit transfer/eating torches - he did liquid dancing and trailing around me in various poses, grabbed my hair and made me lick the flames etc. He then fire ate the wicks to blow them out.

We then retangled/detangled ourselves with our chain and it was my turn to dominate. I dragged him over to a bar, bent him over it, stripped his PVC top off him whilst he lit my 2 fire flogs. I then flogged him.

As the song transitioned over to Voodoo People by The Prodigy, our fireslave brought us our toys - DB poi and me on double staves. While we were waiting for our slave to light our toys, we kissed and then WHAM! Kicking beats and crazy energy combat-style firedancing, lots of interaction, lots of ground work and a whole lotta sex appeal. The audience of a few hundred (?) people were very excited and clapped and cheered us along, especially after a big music breakdown....

It was fun and sexy. Will send pics if/when I get my hands on some. I know lots of people were taking happy snaps and was shown some digi pics on someone's camera, just not sure if I will be sent them.

Thanks for your well wishes guys. plantgirlll: not sure if we will be a regular performance at hellfire nights, but will keep you updated for sure!

Posted: 24th Mar 2003
was ment to be worked on my master tom at first but then got there to find out both him and jacky where fully booked for the night (they ended up not doing any work just running around making sure every one was happy (which they were)

im sorry my camra was not working friday night. its been a little temprimental latly. so no pickys from the brains

my night was great to a point. i had fun talking to people havent seen in just over a year. the only down side was the fight i had at about 3am with some imature bull dyke got the shits with her atitude that she belived that she could order me around (am not sub but am not dom either) she could nto also understand that she needed to ask my permition first before doming me

went home and was inbed and asleep by 3:30 (very quiet night for me)