A little history of this web site and links to archives.

The match is struck

This poi site was first created using the software package "Front page" by Microsoft®. It went under the url of www.juggling.co.nz as that was a url I had purchased earlier. The site was uploaded and went live on 26th October 1999.

Our first poi discussion board

This poi discussion board went live on 7th February 2000 and was used until 12th December 2000.

It was set up on a Microsoft server using the built in "Front page" server discussion board. It did the job quite well in the beginning. And so the site grew to the extend that this type of discussion board was no longer suitable.

The page was getting too long and took ages to download using a slow connection. The search button funnily enough never worked but being created by Microsoft it probably was never meant to

I used "paint" to draws out some neat little site characters and some funky navigation buttons in 2000. Unfortunately these took up too much of the screen and pushed the content too far down.

I also made some funny animated GIF's like the talking couple above.

A picture drawn by me (Malcolm Crawshay) depicting our diversity as a group with a common focus (Yes, I am colour blind, and proud of it)

KISS or "keep it simple sweet heart".
Made a simpler navigation system with javascript drop down menus. These were guaranteed to be suitable for all browsers. Unfortunately they were not

A little dragon greets those entering the shop in 2003.

Archived files as at April 2004

The following modules have been archived for historical purposes.

The web site had become very "piece meal" with many modules spread across 4 different servers and operating systems and thus unable to talk to each other. In November of 2003 it was decided to start again from the ground up to develop a new totally integrated web site with one login giving access to all features. A new look with many features as suggested by users and customers.

Drop down menus are finally compatible with most browsers. Six months of hard work and the new site is ready for all to see in May 2004.

Well those drop down menus have become a hassle. They were meant to be all browser compatible however they are not. So we have removed those put in new simple HTML navigation and added in a google search button at the top of the pages because Google is far better than our own search tool. More little improvements here and there to make things run a bit more smoothly and an improved HELP page. To save on bandwidth we are again hosting more video and picture files on a separate US server.

We have moved away from the dark grey colours and gone for something a bit more brighter. Site looks more consistent across all areas. Logo man is no-longer so alien looking. 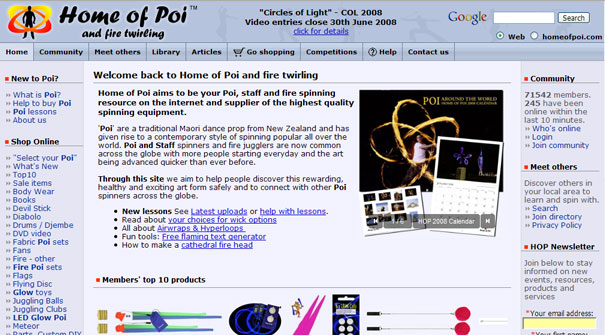 We have gone more curvy. Overhauled the shop to include many new functions and broken down the main page to direct visitors into the three main areas of the site, Community, Lessons, and Shop. 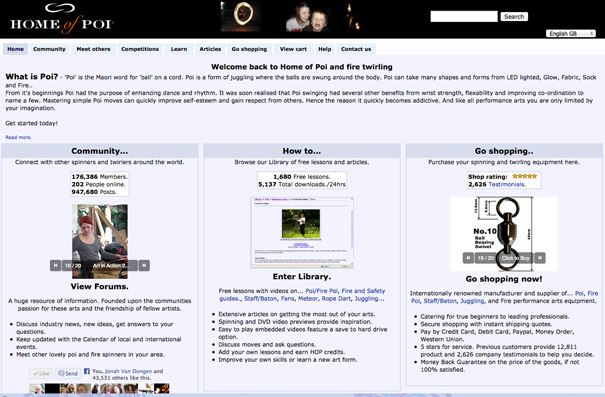 We decided to go all out and get a more professional looking website in 2008. Alas during this long process we were ripped off by Carl and Suyin Bowden of 16 Hands Ltd. 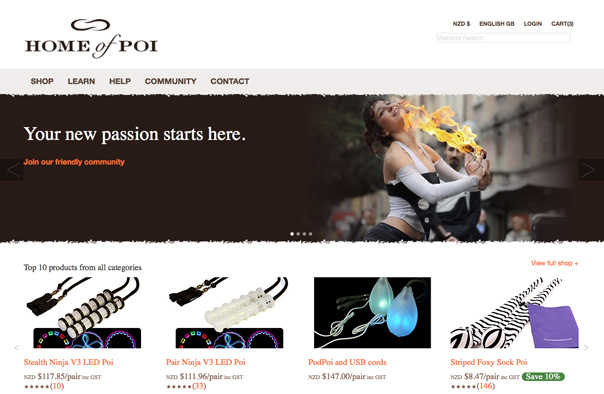 Using bootstrap we have the site catering for phones, tablets and desktops. New Design care of E2Digital and a proper login point with ability for using Facebook as an account. JQuery has added better functions throughout the website. Featuring amazing community photos which change on refresh. Multi-language further extended through the site. 2 months of hard work but pleased with the result.
Home of Poi