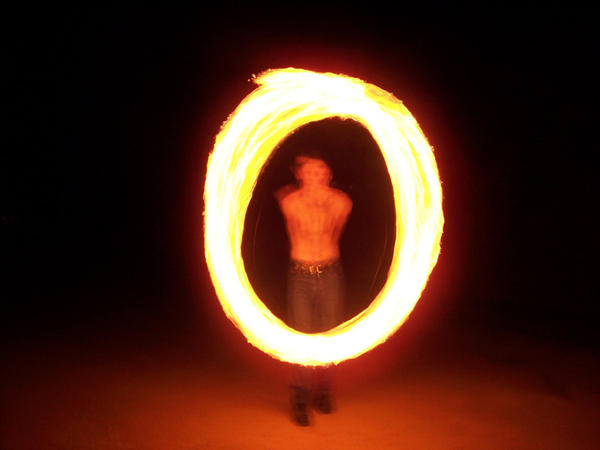 Posted: 10th Nov 2005
I live in south Houston, the Clear Lake area near NASA. The local Houston fire group that spun at Helios has kind of died out a bit. Or the get togethers have moved too far for me to travel.
I'm looking for other spinners in my area simply to meet and perhaps get together every now and then to practice and have fun. I don't *really* know any other spinners and I have a lot more fun and practice more often when I have someone else to spin with.
So if you're interested in having a spin buddy send me an e-mail or IM me if you see me online.

Posted: 11th Nov 2005
Hi there! I'm down here in Galveston, but very much connected with the Houston crowd. Yes, the gatherings at Helios have stopped completely because the owner scheduled other things at our regular spin times. I can tell you that a bunch of us will be getting together next Friday in the Heights. Hopefully, this location will take the place of our regular Helios stuff. The owner of the property is our regular dj from Helios if you are familiar with him.

Posted: 21st Sep 2007
Bumping this because it's gotten really hard to find people to spin with out here.

I'm in Southwest Houston and hoping there's a group -- or if not a group at least some people-- out here. Everyone I can seem to find here is involved in performance-based practice, and I just want to find a group to have fun and steal skills from...er...I mean learn with. Poi, staff, fans, hoop...I've got all the toys and no one to play with/learn from.

Balls of Fire was nice and friendly and laid back, but that was before I started spinning myself, and now they seem to be gone.

Now that the weather is cooler, I'd be a fool not to poke my head out and see if anyone else is around.

Posted: 21st Sep 2007
GreatBallsOfFire still exists as a yahoo group. There is one group that I believe meets on Monday nights in the Heights on a weekly basis for exactly what you seek. Make a post on GreatBalls and someone will usually clue you in to location.

There seem to be several people at the moment wanting the same thing you do, so it might be worth it to make a post, and I bet others will chime in.

Thanks for the response. I've been on the GreatBallsofFire yahoo group for at least a year, and there have been very few posts, and usually the posts were about something that had alrady happened.

I just popped over to the group, and it looks like someone's just posted looking for the same thing I am (the daily digest hadn't gone out yet, so this was the first I saw on it) so...I'll have to pop in and echo.

I'm already on the Houston Burners tribe and the HoustonAfterburners too. It seems like the only thing anyone posts about there are actual performance nights and shows, though, which is nice for looking, but not for doing. I'll have to compose a post for the tribes to see if I can find something.

Oh, the Heights thing isn't related to the Tuesday night Zion's Flame practice? I guess I got them confused and thought it was the same thing (obviously not since it's different nights!) I'll have to check on that. I'm on the Zion'sFlame group, but haven't gone out because they seem very performance oriented.

I'll keep fishing around in different places, but your post was encouraging. Thanks!

Posted: 21st Sep 2007
While Zion's flame may seem performance oriented, they don't actually do many performances, so it is mainly their group practice. The organizer (Warlock) wants it to be a performance group, but there really isn't enough business around town for him to solidly get that going, so it's mainly just a practice, although since I've never actually been to one, I can't say for certain. The Monday night thing is definitely unrelated, although I do think several of the Zion's Flame members do show up.

I also see that you did get a response from Brian on GBOF. If you've got it on digest mode, you might want to undo that as it will take several months for enough posts to appear in order for the digest to get sent. Brian's an awesome spinner and had a huge hand in me picking up anything spinny related, so I'd say keep up the contact with him, and it might get some of the rest of us old foggies interested again.

Posted: 23rd Sep 2007
I honestly didn't think to get much response from GBOF, since I'd posted a similar request a while back, but it's realy jumping over there now with people trying to get organized, which is great. Between that and the responses I've been getting on Tribe, I should be able to find a group I fit in with and can regularly Actually Get To.

Yes, I got the message from Brian and responded to it. I saw him spin a couple of times last year or two years ago, and he's really an astounding spinner. Fluid, dancy AND technical! I'd be a fool to not try and keep up a contact with him."

Yeah, I'll pronbably switch over to get individual messages on the list. I'd been getting the singles on time, with no problems (the situation I posted about seeing messages after the event was that people were coming on after an event or practice and posting pics and stories, where the event or practice had not been announced online.) But since the messages these days are so valuable, I want to keep better track.

HEh. It also turns out Zion's Flame isn't as far away ad I'd thought. I thought they were actually out at Conroe.

Current plan is I try LCC this coming Monday and Zion's Flame Friday and see what works for me. Meanwhile drilling my basics for the next 2 weeks to get them cleaner in the hopes I actually can get some coaching from Brian when he's free again.

I've gone from "woa is me" to "not enough time for everything!" in one night... Home of Poi works for ME!!

Posted: 25th Sep 2007
I live a little Northwest of Houston known as Cypress (about 15 minutes from Houston). How could I get information about meet ups? Yahoo Groups?
EDITED_BY: decemberscalm (1190665015)

Posted: 25th Sep 2007
Yes, the yahoo group I mentioned 4 posts up from yours is your best bet. More is discussed there than on tribe.
decemberscalmSILVER Member
member
49 posts
Location: Cypress (Houston), Texas, USA

Posted: 26th Sep 2007
I haven't been to the practices much since I moved to Galveston. You very well may be the youngest person there, but please don't let that bother you. We are a really friendly bunch.
decemberscalmSILVER Member
member
49 posts
Location: Cypress (Houston), Texas, USA

Posted: 2nd Oct 2007
I live near Sugar Land and would love to practice and learn with others in the Houston area. I've been spinning poi for one year and so far only know 2 other people who spin. I would like to get something going for anyone who enjoys it as much as I do. Someone tell me when and where!

Posted: 3rd Oct 2007
Subscribe to the yahoogroups that I mentioned previously in this thread. It's very low traffic, and practices and such have been posted on a regular basis recently.
cafireBRONZE Member
Member
1 post
Location: USA

Posted: 17th Oct 2007
Hey i am new to the fourms and i wanted to know if there is anyone in the santa clarita/saugus area we are outside la about 30 to 40 min pleas elet me know

Posted: 17th Oct 2007
You might want to find a listing in Cali at least. This is a TX thread, so I'm not going to be any help. Sorry.
Home of Poi