Posted: 1st Nov 2005
Was spinning at the Clapham common meet this weekend and was trying stuff with kicking the staff.
Was just wondering if anyone else had tried this and had any thoughts on it.

First thing to mention I would onlydo this with a solid cored metal staff. I broke my wooden one and reckon a hollow metal would bend/dent.
Also, wear shoes. I've been doing kung fu for years and have a fairly well conditioned foot and it still hurt like hell when it hit the bone.

I found starting with the staff spinning in a vertical plane infront of you, you can give it a little throw in the air so that it maintains its vertical plane and spin. If you kick the centre point while it is horizontal it will fly up into the air while carrying on spinning.
Getting the timing and aiming right on this is a bit tricky though I was only hitting about one out of 5.

So I tried something a bit easier.

Hold the staff horizontally infront of you, throw it up so its horizontal and let it bounce off your knee as it comes down,
It should still be horizontal. Now kick it off centre and this should if done properly launch it into a vertical spin. Yay

The main problems I'm having at the moment is the staff not maintaining its plane.
Depending on the angle which the foot makes contact the staff was moving forwards and backwards.
Depending one where the staff was kicked it was shifting left and right.

Anyway, just thought I'd share....
tell me your thoughts.
KK

If you're getting hit, move faster...

Posted: 1st Nov 2005
At a guess I'd say that it's possible a thread like this already exists? Maybe?

But anyway, I do the horizontal knee bounce and kick quite regularly, it's pretty effective if people aren't paying attention and think you've dropped it.

You can also roll the staff down your leg to your right foot, flick the staff into the air with that foot, then kick it with your left to start it spinning. Catch and you're away.

With groundwork, if you're lying on your back spinning in front of you, then you can stop spinning, throw the staff vertically up about a meter, get your legs under it, and kick it when it starts to come back down, sending it about 8 metres into the air and giving you time to get up and catch it. Still working on this one because it's difficult to get the kick to send the staff straight up when you're kicking it with both feet.

Some ideas for you...

Teach me! Teach me!

Posted: 3rd Nov 2005
kicking implies alot of things i try to avoid when i manipulate the staves with my feet, knees and thighs. Always try to twirl as fluidly as i can, kicking, striking, beating conservative politicians are right out for me.

the lynx is a great example of fluid manipulation from the feet. plz visit glass's gallery!

Posted: 4th Nov 2005
Me and krazy sebastain from austria were doing something we called ninja death kicks,

it invloves stalling on your feet kicking back up into the air then either kicking, or flat palm kung fu punching the staff so it flies through the air and bounces off the opposite staff returning to your hands. After lots of ows we actually got it to work semi regularly

Posted: 4th Nov 2005
I have worked in doing a horizontal plane spin tossing it up in air and bouncing staff from foot to foot then kick up and catch...
not very good at it yet but getting there.

the lynx is pretty but i can't do that yet

working on other foot/leg manipulation tho 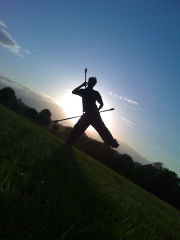 wooden staffs! this is how i broke my blue one

Posted: 7th Nov 2005
bills probably talking about this https://www.homeofpoi.com/gallery/showpho...=500&page=1
which is not a lynx but cool nonetheless