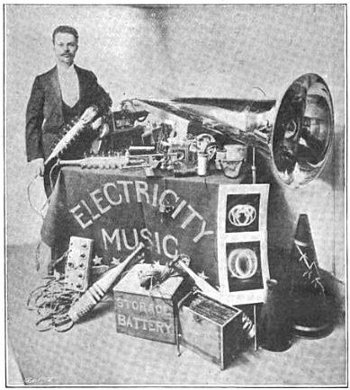 From the Strand, January 1900: As a novel entertainment, George W. Patterson of Chicago fitted a pair of Indian clubs with electric lights powered by a custom-built 35-pound battery. “To give a display the room is darkened, and Mr. Patterson, taking his stand in front of the audience, turns on the current and swings the clubs with the most wonderful results.” The time of these exposures is 5-10 seconds: 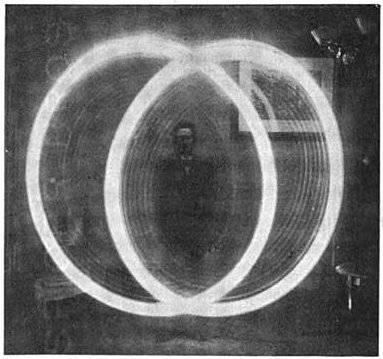 “We notice two distinct ‘O’s,’ with a very thick outer circle or ring. This larger circle is produced by a thirty-two candle-power, fifty volt lamp which is usually run on 110 volts, fixed to the tip of each club. Some idea of the power of these two lights, which are necessary to make the figures, may be gauged from the fact that they are too dazzling for the naked eye when lighted and stationary, and are so powerful that they are capable of illuminating an entire church or public hall of average size.” 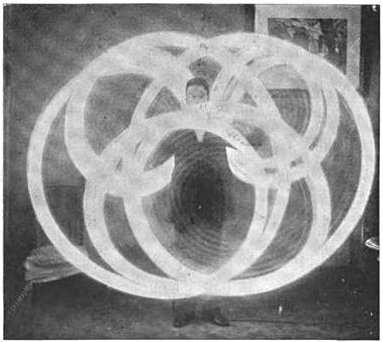 “A pretty design produced by lighted clubs in a darkened hall is seen in our third photograph. The clubs are always swung to music, so that the effect to the audience is still more pleasing. The patterns or figures which may be obtained by the swinging of the clubs are almost infinite in variety. The lights on the clubs are under the control of an operator behind the scenes, who turns on and off the lights of both clubs by means of a switchboard.” 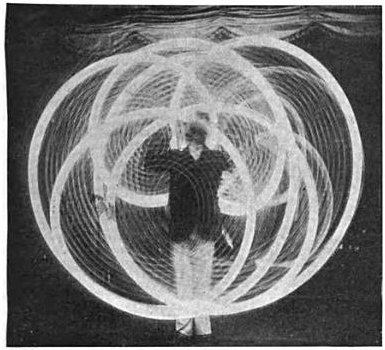 “In order to produce such a charming picture as seen in our next photograph, the clubs, of course, have to be swung fairly rapidly. Indeed, it would be impossible to obtain so many circles with one pair of clubs unless they are swung quickly, while the grace and style of the whole effect speak volumes for Mr. Patterson’s ability as a club-swinger. His club swinging has rightly been termed ‘poetry in motion.’” 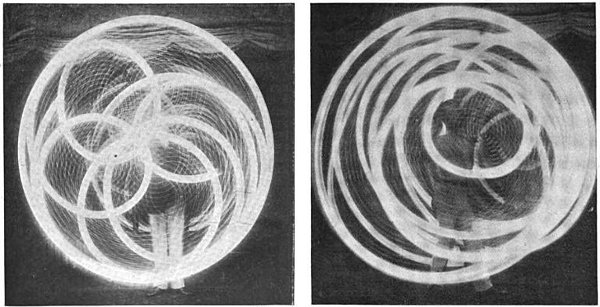 “A complication” and a “running figure.” “Although this kind of electrical display with Indian clubs is entirely new so far as the public is concerned, Mr. Patterson has given much time and thought to the subject, and his entertainments have not reached their present high degree of excellence and novelty without a great deal of patient study of that vast and marvellous subject which we call electricity.”