Some of this will be beyond what you're after but you may well want it in the future and I think it'd be beneficial to read over and start to think about even if you are not attempting half of it.

A beat is a single Poi rotation.

Timing: Same time is when the Poi move together. When the left Poi is at the top of its rotation, so is the left.

Split time is when the Poi are at exact opposite parts of their rotation to one another... when the left is up the right will be down.


A plane is an imaginary line that your Poi runs on. Picture standing in a tic tac toe box, standing in the center square.

The lines running along by your sides is a wheel plane, the ones in front and behind are wall planes.

If you do a figure 8 in front of you as you do with a 2 beat weave, but using one Poi only you're doing it in a wheel plane.

If you keep doing that and turn your body to face another plane... then its in a wall plane.

You can also have a horizontal plane, as with a corkscrew.

Recently, a number of people have been experimenting with diagonal planes. These form an X when viewed from the front.

But then if you look at the buzzsaw, its almost as though its another plane. I refer to it as the buzzsaw plane, though a lot of others have referred to it as being a part of the wheel plane.

Why don't I agree with that? Buzzsaw flowers, that's why... it's a buzzsaw, wall plane movement.

A stall is when the Poi comes to a stop and then continues. You can either move in the same direction or in a new direction when performing a stall.

A pendulum is a movement that involves doing two of the simplest kind of stall. In this motion a Poi will reach a 3 o clock position and then come to a stop, will then move in the opposite direction through the middle of the clock until it reaches the 9 o clock position (Without touching any other number) and then continues back along the numbers 3-9 where it performs the same maneuver again.


Isolation is when you make part of the Poi stay in one place . . .

Technically speaking if you're just spinning the Poi you could call it a handle or hand isolation, because your hand doesn't move!

But usually an isolation refers to getting the center of the tether to stay in the same place with the head and the hand moving on the same circle.

You can also do a "point isolation" with the HEAD staying in the same position. It must be noted that I have never seen anyone do this for even a whole beat, most I've seen is a 3/4 beat, it would be impractical to your spinning to even attempt to get full beats, I think... but if you have oodles of skill and feel you know a way you could work it in, feel free to try!

Isolations take a lot of practice.

A unit circle (as far as I am aware) is the length of the Poi, its the smallest circle that your Poi can make, if you do a point isolation your HAND makes a big circle and if you're doing a normal spin, the head makes a big circle.

I forget which ones I do but I KNOW I do split time opposites. You can actually do same time opposites also, but I omitted this because I like people to be able to work these things out for themselves, gives a nice little giddy boost as well as displaying that they've clicked something else into place.


All these classifications are about interactions... so far we've covered how Poi interact in accordance to one another and how the Poi interact with the Poi they're on. . .

But just remember that the interactions are universal, anything reacting with anything else.

This was SLIGHTLY covered in isolations, but I left it out for fun... we'll go back to it soon.

FLOWERS are poi-arm interactions, both Poi and arm will be doing circles.

When we talk about flowers there's Antispin and the other one, has a number of names, there's a thread thread about this I think I like Prospin myself.

The number of 'petals' depend on the ratio of Poi rotations to arm rotations.

1:1 prospin would create whats called an "extension" this means that you just spin the Poi and the arm at the same rate in the same direction so the Poi looks like an extension of your arm.

Prospin always has ONE more Poi rotation than 'petals' as the last one completes the circle round the outside if you wanted to think about it like that.

Antispin has one more petal than Poi rotation. 3:1 is 4 petals. 2:1 is 3 petals, the reason being that the arm moving in the opposite direction will cause the Poi to meet the rest of its pattern earlier.

Hard to explain that one in text, but it is the case.

1:1 antispin will create this
http://www.youtube.com/watch?v=uggNoLvJnIw
This is called a cateye.

http://www.youtube.com/watch?v=Bwf7bLRXBLU
This has both isolation and a cateye. This shows how they are both the same ratio just one is antispin the other is not.

Linear Isolations or lines are movements that cause the Poi (Can be singular) to move along a straight line, the most common of which are verticle
http://www.youtube.com/watch?v=2CDjvc9N1Qk
and horizontal lines as with a plus sign. +

The Poi can either move back along that line or at the tip of each of the lines the direction can be changed to a diagonal like the one in the following link... http:/youtube.com/watch?v=Wglh1Tqncn4#t=01m58s
which could draw a box around the plus sign. Any movement from each of these points or even point in the middle are while very difficult definitely possible. (See images at the bottom of this page)

A linear isolation is usually done with a stall and a partial point isolation or an extended cateye type motion or more commonly both.

Señorita Pineapple Pete has some good line isolation demos here
http://www.youtube.com/watch?v=Wglh1Tqncn4
or you could just click back to the start of the line iso vid just above. 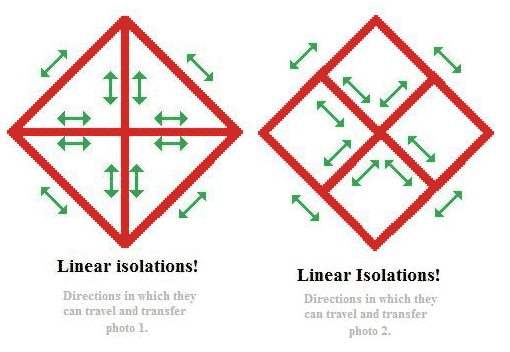 CAPs - Continuous Assembly Patterns
These are closely related to hybrids, and have recently (the last two years) become quite popular. Exactly what the difference between these and hybrids is is still slightly unclear, but it appears that an important part of their look is that these are asymmetric in time, rather than space.

That is to say: each hand makes the same pattern (in its most basic form, extension and 4 petal anti-spin), which differs depending on time. This differs from a hybrid in that in most hybrids each hand does something different continuously.

The basic pattern is a C-CAP, where the Poi first extends for 180 degrees. At some point, the arm changes direction and the Poi is anti-spun for 180 degrees. There are a number of possible variations, such as sinspinning instead of extending. Note I have worded this deliberately vaguely in order to not prescribe a given orientation or plane or anything.

Plane shifting is a group of moves where one jumps from one plane to another. The most common method is with a stall. A good drill is to spin one Poi normally forwards in wheel plane. Stall down. On coming out of the stall, move into the wall plane. Stall down and come back out into wheel plane.
If you are comfortable with horizontal stalls, add those (and the horizontal plane) into the mix.

Plane bending differs in that the movement from one plane to another is not done by stalling the Poi, but by "bending" the plane. Simple example: if you try and twist a Poi Spinning in wheel plane over time, it eventually ends up in the wall or horizontal plane. With some practice, it is possible to make this happen very quickly.