Posted: 6th May 2009
I've fallen so out of practice that it's depressing. Does anyone have any suggestions how to get back into the swing of things? Even if it's diet suggestions (I've become rather unhealthy and fat) I just don't feel like how I use to way way back when and would like some help!

Posted: 6th May 2009
Stretch and warm up before you start playing. I like to give my back a bit of a crackin to start with. Prolly not great for my back but thats what I do.

Cos its kinda funs and its a nice way to warm up and its got low frustration levels. ^_^

Posted: 6th May 2009
I found poi like riding a bike. You never really forget how to do it and it hurts when you mess up.

Not much to add though, sorry.

Posted: 7th May 2009
I find spinning is much like going to the gym.

The hardest part is getting out the door.

Maybe it would help to think of your practice sessions as training ? Pick some abstract goal, like becoming the best in the world, aim high, settle for what FSM gives you.

Posted: 7th May 2009
Put on some music while you practice.

Find someone to spin with.

One thing that usually works for me is to load up a bowl of...tobacco and smoke some, spin until i hit myself really bad, smoke more back to spinning

Posted: 7th May 2009
Originally Posted By: PojePut on some music while you practice.

Find someone to spin with.

One thing that usually works for me is to load up a bowl of...tobacco and smoke some, spin until i hit myself really bad, smoke more back to spinning

I've been looking for people to spin with. there's not many people around me that spin. As well as I don't smoke- soooo that won't work. I tend to have time to myself only at the late portions of the night when everyone's asleep too.

I also keep telling myself "I'm doing this for me, not them." because as i was younger Poi was just something to show off over.

Posted: 7th May 2009
a way that might help you connect with people in yer area is to get on Tribe.net and look for a MA fire group, if not there are still a bunch of spinning groups and stuff you can join and get ideas from

Posted: 7th May 2009
Training anything is all about routine, knowing what you want, and how to achieve it.

What do you actually want to achieve out of spinning? start with this, and the rest will follow.

It sounds like you are looking for health benefits - if so, you might want to consider doing a yoga class, and then hitting the poi. This will develop your flexibility and core strength, as well as give you a chance to 'centre and relax' your mind, in preparedness for moving meditation (poi).

Posted: 8th May 2009
All down to motivation... you've either got bettter things to do or you don't really want to do it... Seems to be the way with me anyway.

Posted: 8th May 2009
Yeah, my motivation has been lacking- but today might of changed it. I did a class presentation on Poi and demonstrated ^^ got oo's and ahh's 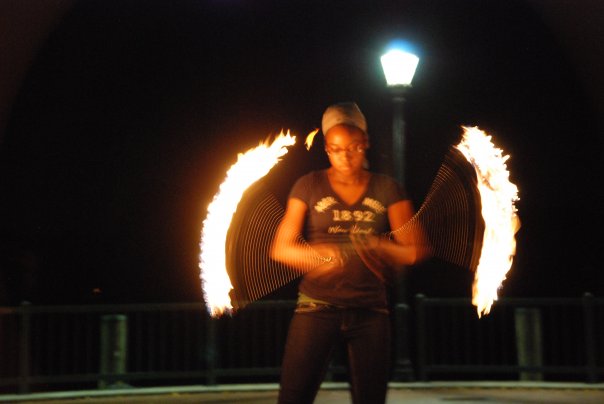 Posted: 9th May 2009
spin with a friend and with music

somedays i dont feel like working out... but i tell myself atleast 5 mins... after awhile you get into and go for hours. its like eating potato chips!
maybe the same thing can be applied to poi

Posted: 9th May 2009
ooooo
watch awesome poi vids too!
i don't know if it will have the same effect on ppl who arent begginers

Posted: 9th May 2009
I still watch the video that motivated me to begin doing Poi past the 'beginner' stage. So great ^^

Posted: 10th May 2009
Originally Posted By: L0s3r_r@v3rI still watch the video that motivated me to begin doing Poi past the 'beginner' stage. So great ^^

What video would that be???

Spinning makes the world go round