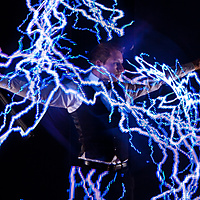 Posted: 1st Aug 2006
hey everyone, as some of you may well already know, a few years past my time up here in sheffield a wonderful chap called p.k got together with some of his friends and created the local event which we all know and love; poi in the park. each year since we have been getting together every month to spin fire, teach new people, learn new tricks ourselves and generally have as much fun in the park with cool people as can be had, and each month id like to think we all come away from pitp enriched, sometimes slightly singed, but always having had a good time.

every year around the september/october time however we also have a big birthday celebration to mark another successful year of pitp, and this year we've got something very special lined up for you all.. :-)

sadly mr pk is no longer in sheffield to host the event, although he and his family are always here with us in spirit, but it has been left to matt and i to carry on his legacy and ensure every time we meet, our community is as friendly, welcomgin, fun and helpful as possible
lollipurple penguin- soon to be
478 posts
Location: playing with the pixies at the arsse end of the mi...

Posted: 19th Nov 2006
That video was awsome!
Nice one Meg and thanx

My spelling wobbles. its very good spelling but it wobbles, and the letters get in the wrong place

I should hide more (in front of people)

hiding in front of people isn't very effective. Hiding behind them is better.

Posted: 19th Nov 2006
Depends on if you're filming them from behind. (I would've said behind but I was trying to carry on a theme - or hide in plain sight etc...)

You SOOOO should've put the Sandy/Cantus incident in! Both when it hit him in the back, then the head moments later!

oh and why did you have to film my ass? i know it was wet but i couldnt be assed standing for the show

oh and how come your not in it doing that weird stuff that you do?

Disclaimer:im not responsible for what i say or do whether it be before,during and after drinking alcoholic substances (owned by BMVC).
Creater of Jenisms(TM)
Virginity like bubble,one prick all gone.

Posted: 20th Nov 2006
lol ... there was Monkey Boy tempest in that video.... awsome! thanks Meg, thought that he was lost and gone forever.

Posted: 20th Nov 2006
ah no he's still alive and slinky with his new doubles and also has some footage of pip, so hopefully we can persuade him to stop being a bummer and put it up on the net soon :-)
Page: 1...567
Home of Poi