Forums > Help! > Anyone have any good quality spinning photos?

Posted: 19th Apr 2005
Over the weekend a photographer and I met up and took some photos of me spinning fire - see my gallery for some and let me know what you think. I just realised that I look kinda small in them - hard to believe I'm just a little shorter that Pink...?

Anyway, that was our first session together, and we're looking at ways of making them better (from a photographer's point of view). One thing he mentioned is other pictures to compare to. we've had a look via the galleries, but we're wondering if anyone's got any good quality photos where a lot of effort went into the production of the picture, as opposed to just taking 'snaps' with a small camera. Anyone got anything?

Posted: 19th Apr 2005
I've got some pics in my gallery from many different photographers. The trick is to have a long shutter with a delayed flash. This allows the tails, and the flash freezes the performer. Some of my pics work well because we use so much fire, the fire light illuminates the performer.

Try some more dynamic shots, have the camera come closer, we don't need to see the whole body every time. That way height isn't a factor.

Posted: 19th Apr 2005
Here are some tips I have for taking some really good shots:

- Have it as dark out as possible with any background as far away as possible (ie, big open field at midnight on a cloudy day).

- Use extended exposure but dont make it too long... 2 - 4 seconds is usually perfect.

- Use a flash to capture the spinner nicely.

- Use a tripod to eliminate blurry shots when using extended exposure.

- Dont just spin as usual while taking shots, have certain patterns and poses in mind that you want to capture. This also helps in determining how long to set the exposure (set it just long enough to capture the pattern).

- Use multiple angles and distances.

Posted: 23rd Apr 2005
Cool, thanks both of you. But does anyone have any examples of good quality photos? Surely someone out there has put in the effort to take pictures worthy of displaying on the mantlepiece? At work it's been suggested we print one out and put it up. It would be nice to have something to compare to - see how we can capture the art better, try different things. Experiment.

Posted: 26th Apr 2005
Let us know if you want us to send you high rez copies of pics in our galleries.

There are good quality pics all over the place! Have a look at the webring for example - most performers have great photos on their websites.

Here's one of my favourite (albeit under-rated) pics of me. https://www.homeofpoi.com/gallery/display.php?image=/500/87flash_double_crosses.jpg

Nice one flash fire! That one looks amazing. You've certainly got an interesting variety of photos!

Posted: 27th Apr 2005
check out my gallery. i got plenty more. lemme know if you need any in better quality. we could transfer over msn....

"is optimism in austria just a lack of information?"
-Alfred Dorfer

there are a few FAQ's on hop and poiinthepark, articles about how to get the best out a camera

but for me, its all down to luck

i shoot maybe 20 shots of a single preformer in one position, so i night be kneeing with an upwards angle, and take a series of shots in that position, and then only use 2 of them

i take a lot of pictures i would normally not use...

once you have gotten throught about 200 shots with fire, of glow gear, you will start to understand timing and exposure more and more, and then start to really grab loads of cool shots out of the air

most of my best work is being used by people either in their gallerys or as promo shots, so i can really go and get you any

delayed (or rear syc flashes) are indeed good, means you do get clean, nice trails, and then a clean image of the performer, but sometimes its nice to have that blur effect of arms,or stick, it add something to teh shot at times, like the movment of a head, will leave a ghost head and trail in teh image....

many people assume yoru best shots will come from a straight on shot, or a close up

not always true, some diagonal shots can come out amazing, others using a series of zooms during exposure like myslef and knosti (who gave me the idea use) can make lights appear to spiral or move into teh forground of the shot, making trails move towards teh lens

photos of just your body, will have fire trails in the, so if you zoom to the tourso and shoot there, you will get hand movements and trails those can be nice

if you wnat to stage moves, taht can be cool to
like reels loo awsome

but a full extended reel looks cool to... but they are different time lengths to complete the full move, so you have to understand about expposures against movment time

its no point having a 1 second exposure, if you wnat to capture a move that takes 2 seconds to complete, you will only get have a move, and vise verse

does any of this make sence?

Posted: 28th Apr 2005
use a tripod if you can - loads of great photos of fire performers could be 10 times better with that little bit of camera shake removed imo.
a tripod will make a difference to both the definition of the fire and the clarity with which the performer is captured.

use a digital camera so you can see the results straight away.

and if you want the really good shots, be prepared to do the same move over and over again until you and the photographer both get it exactly right at the same time (this can take a looooooong time!).

mech's point about understanding how long the pattern takes to complete is really important i think.
beware of any shutter delay on your digital camera here.


and don't forget to show us your results

tHeReS gOoD aNd EvIl iN EaCh InDiViDuAl fIrE, iDeNtIfIeS nEeDs AnD fEeDs OuR dEsIrEs.

Posted: 28th Apr 2005
I've go some decent ones in my gallery taken by a friend of mine

and loads more, i'd be happy to send them on.

they are great, but i just dont hugly like them, the picture feels alittle more organic if you like?!

thanks vixen and ado

it is one of my fav pics, and i took it

Posted: 28th Apr 2005
Now this convo is getting underway!

you should get your photographer to ditch the tripod, the flash guns, lighting rigs, and just rely on his abitities with the camera, not with his kit

so all of these where taken, without a tripod, some by my girl frind, some by me


i knwo these are incredibly small, and not all are fire shots, but it shows some of teh effects you can get from not tripodding a camera

its very easy to have a tripod, and take stright on shots with precision, i do use a tripod for some shots and effects, but i use it rarly and sparingly

*edit one shot taken by pounce as well*

Posted: 28th Apr 2005
okay then, i reckon mech disagrees with my tripod advice

i still wish i had used a tripod for this shot though.

and i dont disagree with your tripod advice...

i do use a tripod, but i have grown more acustome to not using one....

i dont think that having a tripod would have cleaned up that image anymore of sim, seems to be a combo of sim moving and the bad lighting levels, that have caused the pixel effect

black and fire is difficult to shoot with exposures, try adjusting teh white balance of your camera next time? 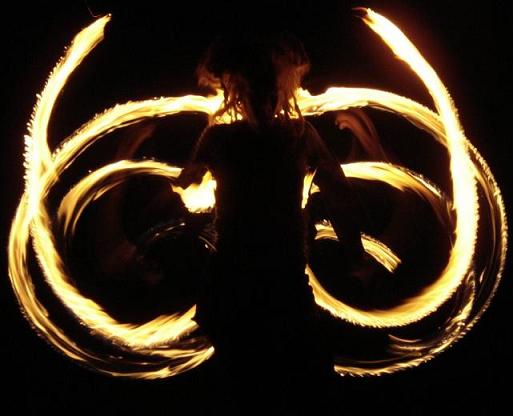 also - check out ry's gallery!! he's got heaps of kewl photos on there too!!

do not meddle in the affairs of dragons, for you are crunchy and good to eat!

if at first you do succeed, try not to look too astonished!

Posted: 28th Apr 2005
cheers mech - i think you're bang on there; adjusting wb would have definitely helped that photo loads.
mind you, that was the first time i had ever used my camera to take fire photos so i had loads to think about already!

there was quite a bit of wobble from me in it too i reckon - unless those stones on the beach were actually moving ...

using a tripod, manual white balance, flash strength and exposure bracketing are next on my 'what happens if i do this' list

your fire will give off differnet levels of light at higher levels of WB, so you will effectivly, from the fire, be getting a flash effect

go break you camera in

Posted: 28th Apr 2005
im just setting up my devart account again, hopfully by tonight ill have some pics up in there....

Posted: 28th Apr 2005
i lilke that tripods keep the backround etc in focus.

we'd never have gotten those new york shots without one.

i bought a pretty pricey tiny weeny one thats absolutly huge!!! fully extended but can also take shots six inches of the ground. i love it.

go have a look at teh pics

Posted: 1st May 2005
I like the fire poi 02 one - Just got me thinking about about making a cone shaped spiral or something? Bit like what you've got, but big circles at one end and a short distance later much smaller. Think that would look cool?