Forums > Social Discussion > where do you spin fire?

Posted: 21st Oct 2004
so... im very curious , just exactly where do you spin with fire . im trying to find a place that will first of all allow me to spin and then be able to use fire . the public parks in the USA arnt quiet like everywhere else , and i live in an apartment , so i dont have a back (or front) yard ! where oh where should i go to spin and not get into trouble for it . i was thinking that i might be able to get some sort of permit to spin fire in the parks (?) im not sure .

Posted: 21st Oct 2004
My regular spinning location is the backyard of a local bar. The owner really likes us, and has even built an outdoor stage for us to spin on.

I have also spun in friends backyards, in an empty parking lot behind my apartment, and on the beach. I fully agree that public parks in the US are not fire friendly, and have only practiced in them.

Posted: 21st Oct 2004
yea ive spun on the beach in South Carolina. the beach is one of my fav places . as for the whole back parking lot ... hmm ill have to do some scouting . not too many friends houses to spin at either , well i got one . and hes a good friend !

My hairs on fireIf its got pistons or boobs, its gonna be expensive...
515 posts
Location: Cyprus

Posted: 21st Oct 2004
Ive got a beach with a pier about 10 minutes mellow walk from my front door so thats where i usually go!
Gotta love the mix of parifin fumes and the sound of the sea!

Henry Hill - 'One day the kids from the neighbourhood carried my mothers groceries all the way home, you know why? It was out of respect'...

ahmet_20valve_ahmet(at)hotmail(dot)com
Hope all is well : )

Posted: 22nd Oct 2004
We used to go up behind my friends house to a big patch of disused land. Most of it was covered in nettles and old matresses, but there was a clear area at the top where we used to spin

The police didn't mind us using it, either. We phoned them to see where we stood legally, and they said as long as we were careful, didn't leave any fires burning and they didn't recieve any complaints, they wouldn't bother us.

I think they were pretty impressed with the whole idea, actually! I don't think fire spinning had ever crossed the path of the Bedfordshire police before

What a wonderful miracle if only we could look through each other's eyes for an instant.
Thoreau

Posted: 22nd Oct 2004
so your saying , maybe i should call the police or probably even better, the local fire department ! see what they say ???

not a bad idea , thanks

Posted: 22nd Oct 2004
im a beach spinner my self, but we also spin at grasshoppah's apt complex, they just dont seem to care as long nothing gets to toasty

You can't avoid pain by fencing yourself from it.
Some times you need the help of others more than anything else
But you have to let them close enough to help......
People want to be needed, I found that out too

My favorite place I've spun was my friends land just out of my town. It's 200 acres of land, all landscaped with a cabin, rock walls, and a pond. It's also the second highest spot in the town so on a clear night you can see the stars perfectly cause there isn't any city lights out there. Spinning out there is great cause you can spin in complete darkness except for the stars and moon.

Posted: 22nd Oct 2004
On the beach, in the park, in the garden, in other people's gardens, in the middle of town, in the pub car park. Anywhere with a 10 foot square space.

"I believe the cost of life is Death and we will all pay that in full. Everything else should be a gift. We paid the cover charge of life, we were born."

Posted: 22nd Oct 2004
so let me ask you this , do you just rock up and spin somewhere , and then get into trouble later or do you actually scope the place out , and then do a process of elimination ???

Posted: 26th Oct 2004
hmmm , new information ... i heard from a little bird that charlotte (north carolina USA) is a "no fire" city . you may not start fires or even have bonfires in your back yard ! this explains why they all have gas braai's (bar-b-q's , grills , just another name for braai) anyways this gives me a whole new understanding of what i am trying to accomplish . i guess to answer my own question , ill be showing up somewhere(?) and spinning fire , and then getting into trouble for it later ( if i do even get into trouble ??? im too sneaky!!!)

I am Jack's Raging Bile Duct...

Loving you from the deepest part of my loins.

Posted: 27th Oct 2004
I spin in the back garden. It's only little but it's big enough. My bloke watches me, he has a bucket of water in case I catch fire! He worries too much.
Next time we go to the beach I'm taking my poi. People have fires there si it should be OK.
How can they tell you you can't spin fire on your own property? That sounds a bit faschist.
Can you get out into the middle of nowhere, where no one can see you?

ps: i think your hubby should rather use a blanket . personally , stop drop and roll is better prevention. .... just wait till youve tryed both ideas , youll see ....

Posted: 28th Oct 2004
I'm ok, I make sure my clothes are nonflamable, and the grass isalways wet to roll on.
He's just a terrible worrier when it comes to me, he seems to think I might spontaneously combust or something if he wern't there to make suure.
Sometimes it's sweet, sometimes it's irritating.

Good luck with finding somewhere to spin. Just don't take a worrier with you!

Posted: 28th Oct 2004
go spin outside the fire department, you cant get any safer than that! otherwise, take a chill pill, you worry tooooo much!

Relax. Poi to the People.

Anger Is A Gift

foehammer: great idea , then after that , maybe they'll let me do a talent show for all the inmates !

dont worry guys im not parranoid , just dont like getting into trouble, with the cops ! 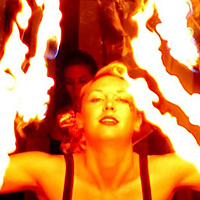 Posted: 29th Oct 2004
for one make sure you have a saftey ( someone to make sure you don't melt) and if they have a house go to thier nieghborhood and do it in the srteet.. the worst and officer will do is tell you to stop..

Posted: 29th Oct 2004
i was spinning fire in a median in the middle of central avenue downtown one night at 3 am, and then 3 fire trucks pulled up. A gang of firemen got out, made a circle around me while I just continued spinning, and then they cheered when I was done and wanted to see more!! Turns out they had just finished putting out a fire a few blocks away. They took pictures of me spinning fire in front of their firetruck and put them up at the station

For a while after that they'd come to all my shows.

This also happened once with cops, I was in a downtown alley spinning fire. A cop car pulled up to watch, then he directed traffic for me when other cars came, and THEN a police helicopter hovered directly above me, shining it's spotlight on me!!

It's true that maybe I'm just lucky, but in general with renegade poi: if I act like the world is mine, they treat me like a star and let me be.

and maybe the fact that your just drop dead gorgous... just look at that avatar !

Posted: 30th Oct 2004
I like the beach, although i have been told that if i am seen doing it there again they will kick everyone off the beach haha weird but they do that when there are fights and stuff. i do it in my driveway most of the time. 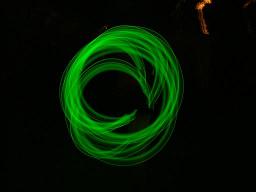 Posted: 3rd Nov 2004
i usually do it in my yard, i talked to the cops and they said its fine, but i do get wierd looks from my neighbors

oh well, me and some friends who, sadly, left for college this year, leaving me all alone, used to spin in the parking lot near the video store, the cops let us do it for like 3 months and then one night all 3 cop cars in my town (lol) showed up and told us they couldnt have people calling in about flaming balls all night

so the moral of the story is.....ask the cops, the worst that will happen is you will get wierd looks from them when u describe what you wanna do.

If you're a pyro and you know it, clap your hands!

Posted: 3rd Nov 2004
i spin at a restaurant called its only natural in middletown connecticut.

I start it, I end it,
I kill and words will defend it.
Got big plans,
blood stained hands
Wanna put my name on the map.
On my way to save the world.
-Missionary, Operation Ivy

Posted: 4th Nov 2004
I Spin fire in a concrete area, in a public park... just try it some where and say its not dangerous coz its an art form. then start on would you stael van gohs brushes?

I start it, I end it,
I kill and words will defend it.
Got big plans,
blood stained hands
Wanna put my name on the map.
On my way to save the world.
-Missionary, Operation Ivy

I Spin fire in a concrete area, in a public park... just try it some where and say its not dangerous coz its an art form. then start on would you stael van gohs brushes?

Posted: 4th Nov 2004
For up here in Canada where we spin we've got the permission of the fire dept and as thus the cops now leave us alone--however I'd suggest check it out with the Fire Dept and if they give you the ok you can always inform the police they've allowed it.

Generally things go well if you're polite and agreeable. . .

Posted: 5th Nov 2004
yea im trying that route , yet its very slow and they just refer me to someone else .... but im sure persistance will prevail!

Posted: 8th Nov 2004
I spin anywhere that our little group gets the "ok"....check with your local art community see what's going on. We have a thing in our town on certain nights when the artists get together and have shows.....there are street performers as well. We got tied in with that, and have gotten jobs and other events. My favorite, though, is a renegade spin on castle grounds after dark!!!!!
Page: 12
Home of Poi