Posted: 22nd Aug 2003
dom mentioned it in an earlier post about mr Vieira de Mello but I thought this matter demanded its own thread:
anyone have any ideas on what the Islamic Jihad and Hamas are trying to achieve through their terrorism?
Is their aim to sabotage the peace "road map"? If so, why do it when the Israeli government is thinking of liberating loads of palestinian "extremists"?
now even the Palestinian Authorities are condeming them...

anyone see the similarity between the PA and the IRA and Hamas&Islamic Jihad with the "real IRA"?

Your life is ending one minute at a time...
So live it.

Posted: 21st Aug 2003
I dont agree with the tactics, but what the Isrialies are doing is BS too.

Personally I agree with Mike Moore, cut the funding to Isrial, and dont give it back to them untill the create a Palistinian State.


Purposly targeting the civilian population is cowerdly. Demolishing buildings just because someone who lived there was considerd a terrorist, is wrong.


Is it an attempt to sabotage the Road Map to Peace?? I think that they still feel like there is a war going on despite whatever it is the Israilie gov. says.

Posted: 21st Aug 2003
I get the horrid feeling there IS no plan or organised attempt

you might be able to get the leaders to sign a ceasefire but it's the troops that break it!

Maybe both sides see the peace process as preventing them from reaching their goals. By maintaining violence during a cease fire Hamas have effectively halted the peace road map. And it seems the current Israeli government would rather keep fighting in the hope of getting their way through oppression, so this is a perfect excuse for them to leave the peace process which they wouldn't even be in if the US hadn't lent on them.

And the entire issue is fed by such a long history of hatred between both sides that it seems unlikely there can ever be peace without a major conciousness shift of everyone involved.
frostypawGreat balls of fire
643 posts
Location: Tunbridge Wells, Kent

it's not 'peace' for the palestinians - it's giving up. it's losing.

the peace process is more "shoosh... now let the big countries decide" and i'm sure noone on the palestinian side appreciates the US pouring vast sums of money into israel's coffers - and then turning to the palestinians and saying "yes i know it was your land, it's not anymore cos we say so - shoosh now"

whether it's the truth of the matter or not i reckon that's probably how they see it - and like that... who would actually want peace?

Posted: 22nd Aug 2003
Not sure I agree with you. Even most of the fundamentalists seem to say that they'd be 'happy' with just having the land originally promised them by the UN.

Posted: 23rd Aug 2003
Neither side is willing to bend the israeli's think that this is land promised to them from god it's written in books and the palestinans want it based on the fact that they live there. Just another example of how religions turn people from rational human beings into fiendish automatans hell bent on doing something because it's written in a book.

Posted: 24th Aug 2003
The muslims have been known throughout the ages to use convert or kill tactics, the Christians did it in the crusades, the Catholics did it and so did the Greeks and Romans.

There is historical evidence that proves that Judaisim populated that area of the world before the Muslims came. It is their land.

Now the decision to allow Jews to move back to their land after WWII was not a US decision it was a UN decision.

Personally I feel that they deserve a land of their own after what happend when the Germans tried to kill every last Jew there was.

I will agree that the US funding isnt helping matters, thats why I think it would be wise to cut our fudning and force the Israilies to find peace on their own.

Bush had good initiative, but didnt use the best judgment with his current plan. However he is trying, I dont see many other governments comming to propose a plan. Maybe they are and I just dont know about it, but still.

quote:There is historical evidence that proves that Judaisim populated that area of the world before the Muslims came. It is their land.

And the United States' land original belonged to who?

While you're right things do change, borders move and populations migrate - who's got the right to say "THIS" point in history is where we'll take the borders from?

quote:Originally posted by Raymund Phule:
Personally I feel that they deserve a land of their own after what happend when the Germans tried to kill every last Jew there was.

Bush had good initiative, but didnt use the best judgment with his current plan. However he is trying, I dont see many other governments comming to propose a plan. Maybe they are and I just dont know about it, but still.

I agree the jews deserve a land of their own, but it has come to the point where the opressed have become the opressors... they seem to have forgotten their own history as far as i can see.

as for bush, he doesn't seem to want to put any real metal into his initiative- it now seems like his "roadmap for peace" was simply a nice pr stunt and as soon as the novelty of it fades away and brings problems, he's simply not going to do anything.

its all so bloody frustrating.

Your life is ending one minute at a time...
So live it.


There is historical evidence that proves that Judaisim populated that area of the world before the Muslims came. It is their land.

I don't agree with this, by the same reasoning America would belong to the Indians, and Australia to the Aborigines.

quote:
Personally I feel that they deserve a land of their own after what happend when the Germans tried to kill every last Jew there was.

Maybe so, but the middle east wasn't a good place, why not have given them somewhere in America? There plenty of sparsley populated areas they could have been given

god given right as far as they're concerned

very hard thing to argue with "well wouldn't some of south dakota do instead?" sadly

Posted: 2nd Sep 2003
i've been reading your comments. i don't know how many of you are living in israel and living the terrorism every day, (actualy, for you, i hope none!!!) but there are few things i would like to add from my poin of veiw ( as a person who lives in israel)
imagin what it's like to open your t.v. once a week, and instead of your favorite show, you see, again, that 20 pepole have died in a bus explosion.
imagin what it's like, to sit on your porch and hearing a bomb explosion 500 meters from your house (10 men were killed that day, in a garden i use to go and juggle few times a week, in the same hour it happened)
imagin what it's like to call all your freind every time there is bomb explosion, to see that everyone is alive...
i can tell you much more about our feers, our everyday feers and about all the miriculs by being in an "almost" situations. the one thing i want the most is pease with the palestinians. and yes, they should have a land of their own. but i'm not sure they are ready for pease. i'm not sure they want to have peace with us, when we are still here. they don't want us here.
the solution is.. i realy don't see any 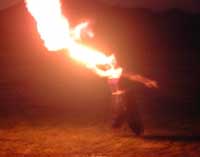 Posted: 24th Jan 2004
sheva, i agree that what the bombers do is a terrible thing. I do not condone, support nor agree with the "martyr" operations in the occupied territories

imagine though what it is like to be a palestinian: forced off your land by an armed settler, humiliated daily at checkpoints, forced to live in camps with basic facilities, be put under curfew every time someone else does something wrong, have your human rights trampled daily.....

checkpoints will regularly not allow arab ambulances through to hospitals

the israeli army gave the order to blanket bomb civilian areas and this disaster was only averted becuase the pilots refused to do it......

when you find yourself ordering tanks into refugee camps you really have to ask where terrorism begins...
Astarmember
1,591 posts
Location: Nova Scotia, Canada.

Posted: 24th Jan 2004
I figure this isn't over untill things get a lot worse. Palestine needs a civil war between the palestinian council and the various terrorist groups in palestine. And they need to do it without very much foreing help or nothing wll be resolved IMO. Especially if israel does any fighting what so ever, because the palestinians will be seen as in league with the israelis.